Skip to content
Oysters and Champagne in Food and restaurants December 3, 2020 484 Words

Have you ever had, and I mean really ever had Mushy Peas?

Mushy peas are definitely part of the British Cuisine, but certainly here in London and the south it is not something that appears on menus, let me correct that, it does appear on menus, BUT what they serve is not mushy peas. They serve peas that have been mushed, which is not the same thing at all. 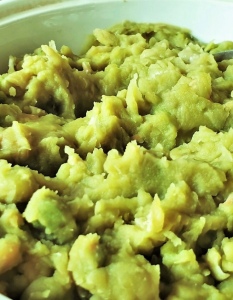 Real mushy peas are made from Dried Marrowfat peas which have been soaked overnight and then boiled until soft and mushy, seasoned and served, sometimes with a pie, oftentimes with fish and chips and sometimes as a snack with mint sauce, or even scooped into balls, battered and deep fried ! It is predominantly a north of England food. 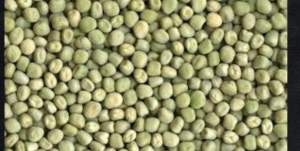 Rumour has it that Queen Elizabeth the Queen Mother, would never has peas served at any meals, as what is the correct way to eat them?

One source says, mash them with your fork, another says, Never do that, another says, spear them with the tines and yet another says, never use your fork as a scoop. Debrett’s says ( and they are after all, All things to do with etiquette) “It may be necessary to use mashed potato to make peas stick to the fork but it is incorrect to turn the fork over and scoop.” So the answer is? I really don’t know, except, never balance them on your knife and try to get them to your mouth !

The British eat nearly 9,000 peas each year and the largest producer and consumer of frozen peas in Europe ( thanks Mr. Birds Eye). 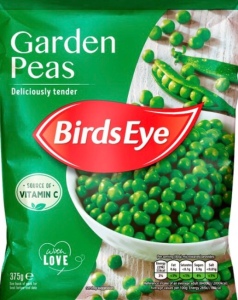 Apparently, there’s about 70,000 football pitches worth of pea farmland in the UK and farmers harvest 2billion portions of peas and they are processed from field to frozen in about 150 minutes, and Birds Eye have been doing this for about 70 years !

I have to admit that I have never, cooked marrowfat peas and rarely cook peas, except maybe in fried rice, or risotto. It is not that I don’t like them but more I find them slightly on the boring side and then how to eat them !

Very often here in the south of England, mushed ( but not mushy) pease are served especially with Fish and Chips. I came, across a recipe the other day which piqued my interest. 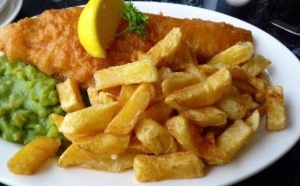 Pea Guacamole ! Um interesting! As we all know guacamole is made with avocados and the consistency of peas bears no resemblance to avocados. However, always up to try something new, I followed ( more or less) the instructions , cooked the peas, added a dollop of cream and here I deviated as I didn’t have feta cheese, but used some cream cheese. The result was, really very nice, but served as a vegetable and not as guacamole. 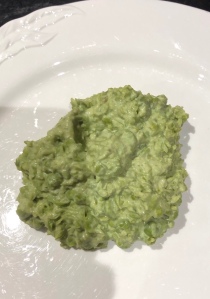