So Sunday saw us playing the fool, we toured part of Tokyo which is called Asakusa,the entrance to which is guarded by  Kaminarimon, the Thunder Gate. This gate with its giant lantern leading to a kitschy shopping street, is very popular with tourists and locals alike, especially on a Sunday morning! The gate was first built in 941 but not in this location. It has been destroyed many times and the current gate was only constructed in 1960! ( presumably it was destroyed by the fire bombing during  WW2).

At the end of this shopping street / arcade is the Sensoji Temple, which is Tokyo’s most famous and popular, but like the main gate is of post war construction.

The highlight of the morning was to visit Cocomo a geisha makeover , kimono rental store.(https://www.facebook.com/Cocomo.Asakusa

So, 6 of us decided that would be good fun, so we were ushered inside and chose our kimonos or in the case of the guys their Samurai outfits. ( the other two opted out, can’t imagine why !)

The donning of the kimono is in fact a very complicated affair. Firstly there are undergarments, which have to be fitted correctly, then more undergarments, then the kimono, then a belt to keep everything in place before the Obi  ( sash) is fitted and tied, before the corded belt is added. Not to mention the special toed socks and thonged wooden ( uncomfortable) sandels.

The traditional Obi could be as much as 68 cm wide and 4 metres long, but today mostly worn by Maiko and Geiko ( Geishas) or for weddings. Originally the Obi was tied in the front, but always nowadays tied in the back. They are made with stiffened brocade and usually unmarried women wear very colourful ones. There are ten ways in which to tie the Obi and one way is the ‘Taiko Musubi’ the drum bow. Our dressers, although they took great pains to make us look pretty authentic, ours were very much of an easier tie.

We had the choice also of hair and makeup, but settled just for the clothes. We had wondered why there were so many girls and women wandering around the shopping streets, wearing Kimonos, now we understood, as we were encouraged to go out and about on the streets. As we wandered out,we were astonished to be such a hit with so many people, our photo was taken several times and we were joined at one point by a group of young people, who thought we were hilarious. 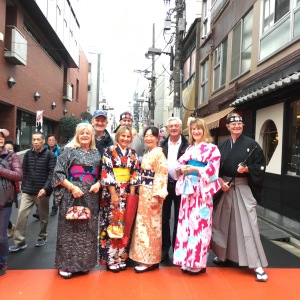 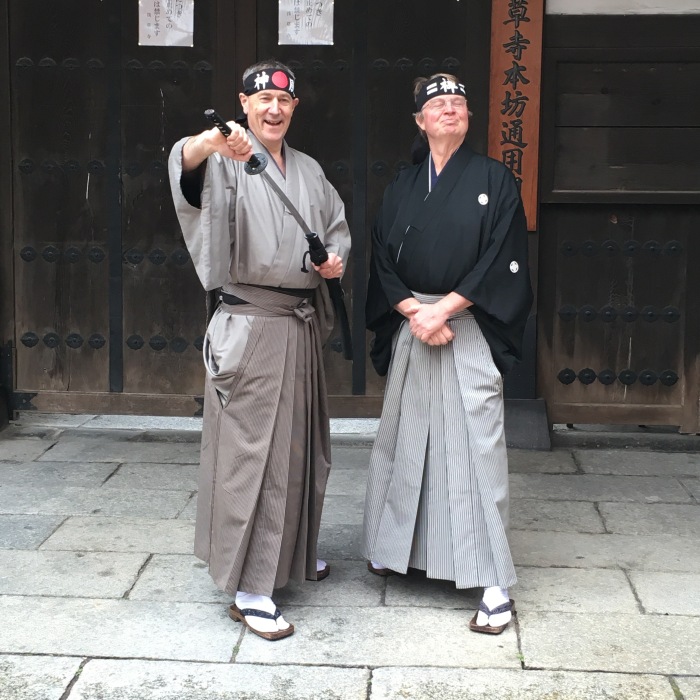 In the afternoon, we went off to an area next to the Akihabara Station. It is called Electronic town. One building there, has 9 floors about the size of two or three football fields. The whole of one floor is devoted to toys, many of which are electronic computer type games, another has household appliances, over a 100 types of microwave ovens alone!

This area is also known because in 2008 a truck was driven into the shopping center and 17 people were stabbed!