Growing up a salad was boring, in fact I guess we did not really eat a salad as a meal, except on a hot summers day, when a few limp lettuce leaves were put on a plate along with whatever other salad vegetables my father grew in the garden, maybe tomatoes, maybe cucumber, maybe celery and radishes! Back then I loved radishes, if you could get to them before the insects did. Then, on top of that was usually a slice of ham or maybe a slice of pork pie, pickled beetroot, ooh how I hated that, dark red vinegar adulterating my plate finished with HEINZ SALAD CREAM. It was only many years later  I learnt that other countries had mayonnaise but we had Salad Cream!! Today the Heinz company is considering changing the name to Sandwich Cream, because research shows that only 14% of purchasers use it on Salads. As far as I am concerned it can disappear from the shelves for good, but maybe I’m being controversial here, but as I have never bought a jar of it, I am not about to start now !

Many years ago, we were on holiday in Gibraltar, yes Gibraltar ! in those days it was separated from Spain, by a physical border, but it had been a dreadful summer in Europe and we wanted a sunshine holiday. So did the rest of Europe and so off we trotted to Gibraltar, being the only option. The salad here, read my childhood salad, plus a chicken leg, which was frozen ! They still wanted me to pay for it !!

Fast forward several years, and my eldest daughter declared ( home from school for the holidays), “Salads are boring!” I corrected her by saying, that maybe at school they were, but not mine. Forward again, and now on the market there is a plethora of ready-made salads to choose from. All of the fast food outlets, have good salad options as do the ready meals in the supermarkets, along with the small cafés and delicatessens, the choice is enormous!

However these can be expensive, so make yours at home, but they can be time-consuming to do.

Last night I made a salad using the following

To start with, slice the courgettes into oval rounds, if that makes sense, ie, rounds cut on the slant about 1/4″ thick. Using either a grill pan, a Teppanaki grill or BBQ grill, grill the vegetables, having brushed them with a little olive oil, do not over cook, remove from the grill and place on a cooling tray to cool.

The Padrón peppers are only available in the UK at about this time of year,, small and green they can be used whole, they give just a little zing to the salad. Sweet romano peppers can also be used. If you don’t like spice leave out the chilli peppers, but if you like them, when cooked chop into bits, make sure you remove the seeds before adding to the salad. The haloumi cheese can then be cut into slices and grilled. I used Goats Cheese, which I grilled . 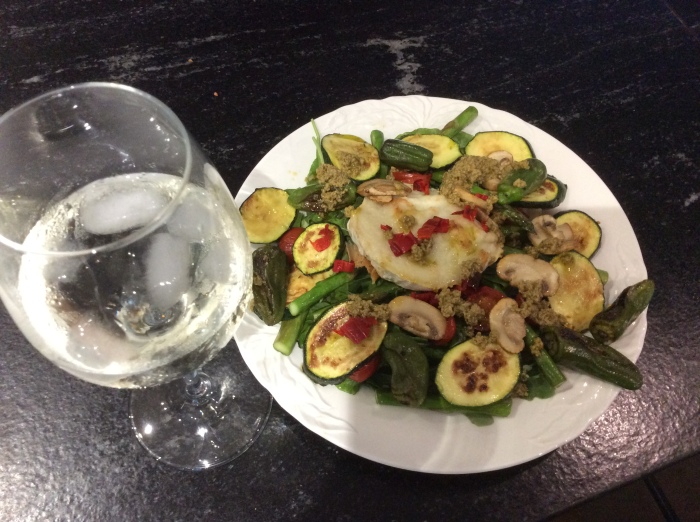 Construct the salad, but layering some baby gem lettuce and some rocket leaves, and then tope with the cooled vegetables, arranging them neatly. Top with the dressing, ( not too much, more can be added if needed)

Remember, a salad can be healthy but never boring !