My French local supermarket, has mice, not the cute, Mickey type nor the Tom and Jerry type, but the dark grey vermin type. I detest mice, they breed like crazy and are incontinent.  And, I do not want to see any evidence of them when I am shopping, no droppings, no nibblings and no sightings!

I have been known to have stores shut on account of mice. Once many years ago in Belgium, my local, had an abundance of them, so many in fact they stood inline ( more or less) to say Bonjour, as you entered. They were everywhere, when I mentioned it to the manager, his response was “Ça vous gêne, Madam? ( does it bother you) Well yes it did, so I ran a personal campaign to get rid of them, and I won. Phew, it was however, not an easy task, when confronting Le Maire, and telling him it would be shut down in England, his reply was a comforting, ” Ah Qui, Madam, ce n’est pas Angleterre, c’est la Belgique “.

Still, years later, willowy Brunette, reported mice in her local supermarket, and behold, Westminster council shut them down overnight. On the other hand, I am grateful that I do not have to shop in Superama ( aka Pooperama) in Mexico City, where sylph like blond has to shop, chicken defrosting on the counter top, along with fish, which generally smells a bit and she has even found maggots in the ground beef.

Still disgusting as that is, it does not compare to our hotel ( sylph Blond and myself) in a remote Chinese town, where mice were running around the bathroom, and cockroaches thought that our back packs made a wonderful new home, or in Kathmandu in the Dwarka Hotel ( a beautiful building with exemplary service I have to admit) where Rats were running down the wall!  And the reply to all of this was “they are only little animals!” I think I can hardly blame them, after all when it is minus 15 C outside, where  would you rather be, warm and snug with a plentiful food supply, or freezing to death outside, But just do not let me see any evidence of them.

There are several food items, available on the markets in France, and as I have said before, that I love food markets, that I do not understand at all. One is their passion for Nougat, huge slabs of it in 50 shades and flavours.

Another is Pain d’Epices, which is basically gingerbread, again available in large quantities, and various extra flavourings . The only time I have eaten it, it was served as a base for Fois Gras, not a good combination at all, the fois gras, hot and buttery, whilst the Pain d’Epices, was dry and boring. This year I have discovered another, and it is Bescoins. Until now  I have not eaten any, however, it was for sale outside our church on the evening of Assumption ( a national holiday in France), we had to look up the word and after many attempts found out that it is a type of bread or possibly Brioche, coloured with saffron and flavoured with aniseed. It is traditionally made in the Savoie region of France and for special occasions.

Onto more exciting food. En route from the French mountains to the UK we diverted via St. Omer, in the main to avoid Calais and the immigrant problem there. St Omer, is a pretty town, with some beautiful buildings but on a warm summers night in August, it reminded me of the Christmas poem. ‘Twas the night before Christmas, and all through the house, not a creature was stirring, not even a mouse! And so it was thus in St. Omer. We had our doubts about our dinner reservation. But we were in for a big surprise. On a Thursday evening, it was quite full , service excellent and food wonderful.

Jimmy Choo, the real life shoe designer ( not the high street brand, which went global under Tamara Mellon) the man originally behind the brand and his couture shoe company, has branched out into the restaurant business. Well, he is the man behind,  Maximini, a Chinese restaurant in the Marble Arch area of West London. It is a relief to have something different from the Persian /Arabic restaurants in this neighbourhood, as this is where the inhabitants of many of the gulf states de-camp to in the height of the summer.

Surprisingly Jimmy Choo has labeled his restaurant Fine Chinese dining, he is from Malaysia, and his favourite local restaurnt is the Satay house, (Malaysian) which is near Paddington Station. We have not been to the Satay House for a long time now, but it is a bit of a hole in the wall type of restaurant, but full of Malays, which usually means that the food is good, and it is!

But back to Maximini, our dinner there on a warm summers evening, was very pleasant though we will not be rushing back. Trip Avisor says that although Maximini has only been opened a couple of years, it is in need of a face lift, but I can not comment, as we sat outside.

The Menu, is in fact a mix of Chinese, Malay, Indonesian and Peranakan cuisine, which is of course, Jimmy Choos heritage. We started with a Mixed Hot Platter, which consisted of Satay Chicken, Prawn toasts and Vegetarian Spring Rolls, all very good. We then chose, myself the Crispy Duck, ( Peking Duck) with spring onion and chinese pancake, Willowy Brunette chose the Sambal Prawns, and himself, the Malay Beef Curry. We also chose, stir fried Pak Choi, Penang noodles and stir fried Broccoli. The vegetables were absolutly delicious and plentiful, actually all of the food was delicious and no complaints there. However, the service certainly needs attention. My crispy duck arrived a good 10 minutes before the rest of the meal. Not good at all, but on re-thinking, we might try again, as the food was outstanding, and given that the Willowy Brunette, would not normally go to a restaurant that smacks of being chinese ( overcooked, precooked and MSG) but she enjoyed her dinner, it could be worth giving it a second chance. 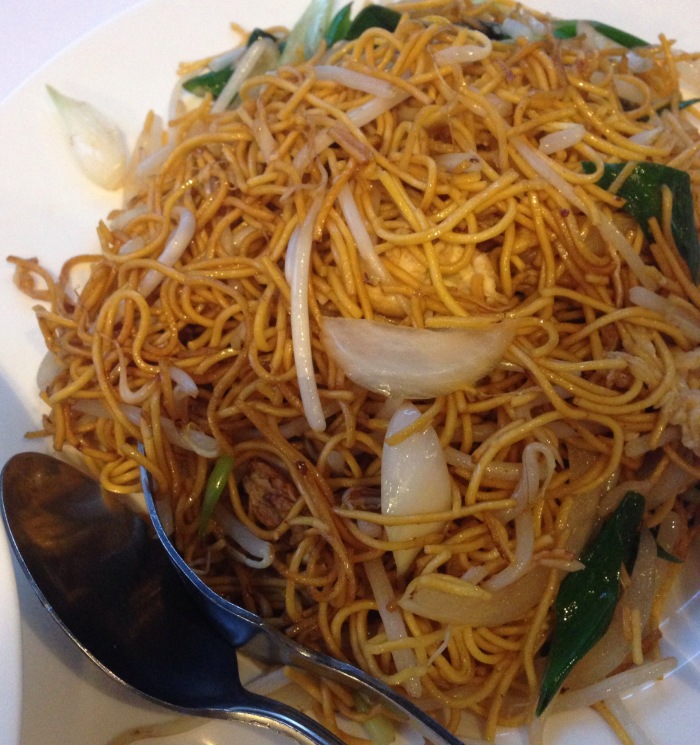 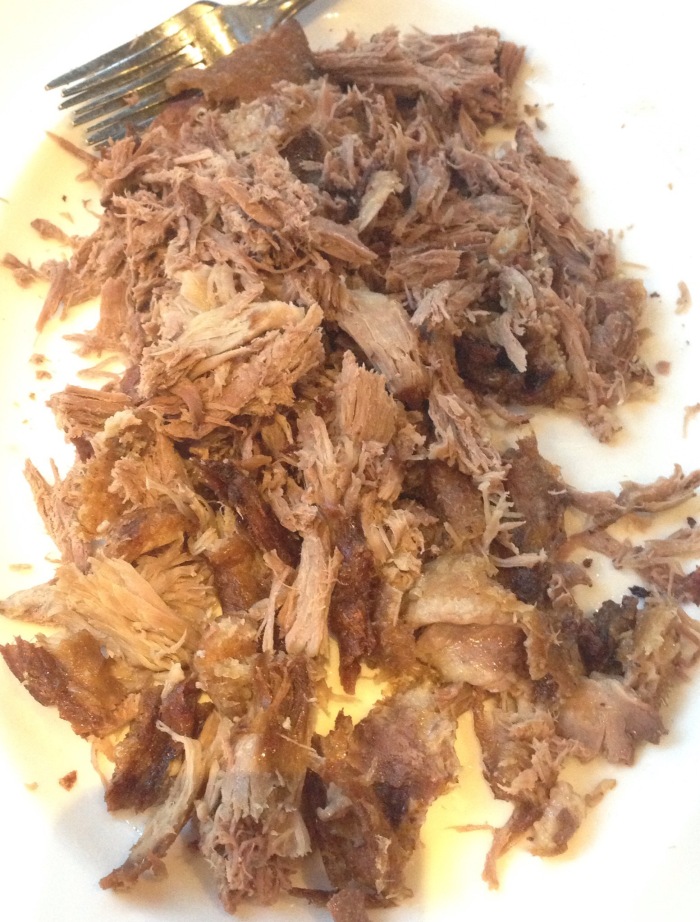 During the summer months, dining heads towards the lazy side with BBQ being the name of the game, fish, kebabs, homemade hamburgers, steak or whatever takes our fancy. However, something needs to accompany the grill food, one of our favourites is grilled Baby Gem Lettuce, which is simple beyond belief.

Allo 1/2 a Baby Gem per person,trim the end off and discard some of the less desirable outer leaves,, run them under water and shake dry or pat on paper towel, smear with olive oil and some smashed garlic if desired. Place on a hot grill and grill for about three minutes before turning, turn and grill the second side. Of course do not over cook ( read Burn) and timing will depend upon the strength of your grill.

The other time that is really simplicity itself is what I call, grilled vegetable salad with couscous and Harissa.

Prepare a quantity of vegetables for grilling, include, red, green and yellow peppers, aubergine, courgettes, tomatoes cut into 1/4’s and red onions cut into thick slice’s . Grill on a BBQ ( can be done in. Grill pan on the stove top) when cooked ( do not overlook) put into a polythene bag to sweat, whilst cooking the remainder of the vegetables. Put all of the vegetables into  bowl or box, pour over some salt and pepper and some olive oil and mix well. At this point the vegetables maybe left until ready to use or refrigerated until needed.

Take 8 oz of easy cook couscous, add a knob of butter and a pinch of salt. Pour over some boiling water, enough to cover plus an inch. Leave to stand until all the water has been absorbed, stir. Leave to one side to cool. 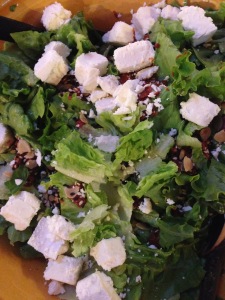 Assemble when ready to eat, put the couscous in a bowel, add the grilled vegetables,top with assorted salad leaves  and then dollops of the Harissa mix. Cut 4 Oz of Feta cheese into cubes, add this to the top of the salad. Toss altogether with small amount of vinaigrette and sprinkle over some white or black sesame seeds . 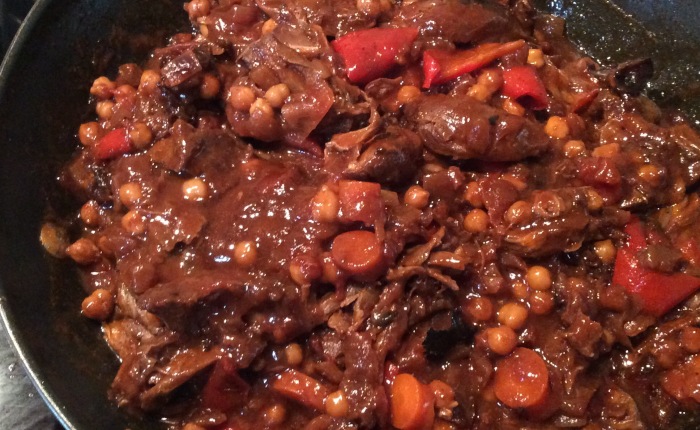 Friends were coming to stay, I defrosted lamb shanks. Friends did not come to stay, but lamb shanks stayed defrosted, so what now? Raining hard did not want to go to the grocery store.On TV , the programme Master Chef, they have an invention test, which I think is fun, and I often play it with myself, what can I make with what I have in the refrigerator or pantry.

And so it was for the Lamb Shanks. I had onions, red peppers,  garlic and carrots, Red wine, oilve oil,  soft dried prunes, a jar of unwanted marmalade, a can of chopped tomatoes , a can of chick peas, a can of Harrissa paste and a jar of onion marmalade. So I set to work, I sauteed the lamb shanks, until brown on all sides in the olive oil, put those to one side, added more oil to the pan and added the sliced onions and chopped garlic, when those were soft I added the carrots and chopped red peppers , returned the Lamb to the pan and added a bottle of red wine, put the lid on and left to simmer for about an hour or until the lamb was really tender. I removed the lamb, from the pan and de-boned it ( I find that usually one shank is too much for one person and so it easier to serve off the bone).

Returned the meat to the pan, added the can of tomatoes  the chick peas, the onion marmalade the orange marmalade, 2 tablespoons of Harrissa paste and about 12 soft prunes, simmered  some more until the sauce was unctuous. I added no salt nor pepper and the result? YUMMY, try it for yourself. Be creative! Try the invention test for yourselves, just remember, in cooking you can be as creative as you like, there are no rules ( well not many, if any) but in baking there are rules, which so need to be followed.


Many years ago, I fell in love with two special cookery books and I made it a rule that every Sunday, I would cook something new from one of them. If your cooking style is in a bit of a rut, then I suggest you browse through a book store and find something that will inspire you to be more creative. One that is very useful, especially when the kids have gone and now you are cooking for just two, is “The Roux brothers cooking for two” by Albert and Michel Roux, and the other one is”Simca’s Cuisine ” by Simone Beck. She co-authored the eponymous ” Mastering the Art of French Cooking” with the doyenne of American cookery, Julia Child. 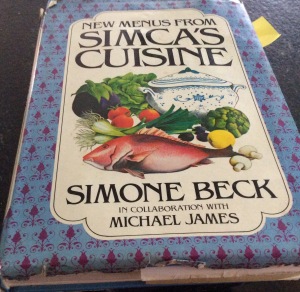 Although both of these books are probably out of print, it is always possible to buy a secondhand copy via, Amazon, or from a secondhand bookstore. I have indeed bought additional copies, so I can always have a spare one to hand.

Recently Glenda Cooper said in The Daily telegraph that, a recent  survey of 2,000 Britons confirmed the fact that on average we own six recipe books, yet make the same nine meals over and over again. Turn on the Telly and there are cooking programmes galore and recently the latest version of The Great British Bake Off, attracted 10 million viewers, and yet, how many go on to cook and exciting dinner? Sadly very few. 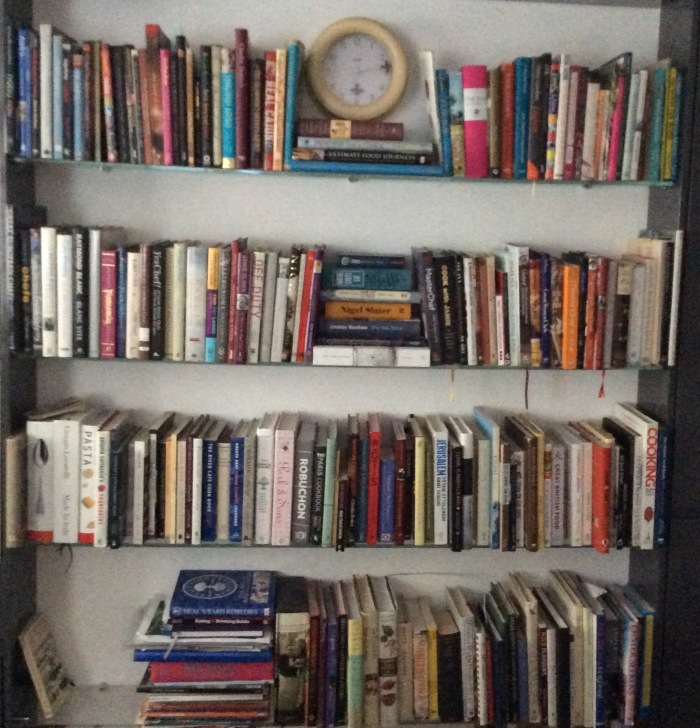