Whilst I love coming to France for the summer I have to admit to getting extremely frustrated in the Supermarkets. Firstly, customer service does not seem to exist, they will close the door on you as you are about to enter, as it is l’heure du repas ( lunch time), or’ Vous n’avez pas pesez les bananes, Madam” ( you forgot to weigh the bananas ) and so now you can forget about the bananas, and the banana bread you were about to bake, or lose your place in the queue and go back and weigh them, no-one else is going to weigh them for you! Or, what about picking up a head of celery, only to be told you have to weigh it, and yes you can buy just one stalk,hence the reason that what is normally left on the shelf are  the tatty outer stalks, as everyone has taken the choice bits from the middle!

My other complaint is the lack of products that I take for granted ( and I realise that I am spoilt by living in central London , But!) The younger Himself accused me the other day of taking Coals to Newcastle, as I was packing the car for our annual pilgrimage to the French Alps. No wasabi, no Sesame Oil, no Sweet chili sauce, no jumbo oats for porridge, no Ghee, no Panko Breadcrumbs,no horseradish sauce, even though the word for horseradish, does exist (Raifort). And, despite the shelves being jammed packed with teas of every type imaginable, no Lemon and Ginger. But on the other hand 10 different types of Lettuce and up to 400 different types of cheese and a 1000 if you count the sub divisions, so some you win and some you lose!

Recently at a lunch, we were served, what was described erronously on the menu as Violet potatoes. I would assume that most English speakers would call them violet potatoes, as that is their colour, however, they are of french origin and are called VITELOTTE. According to Wikepedia  they are a gourmet  french potato and have been cultivated in France since the 19th Century. However the translation of Vitelotte, again according to Wikepedia, is the word Vit means Penis, and prehaps that is because of the shape of the potato.. As potato Crisps/Chips they look just fine, but as mashed potatoes, they did nothing for me not in colour, texture nor appearance, I compared it to either a dead mouse or a giant slug, that is about as appealing it can get! As my willowy brunette has been known to remark, they have to be something wonderful to justify those  calories. I was not impressed. 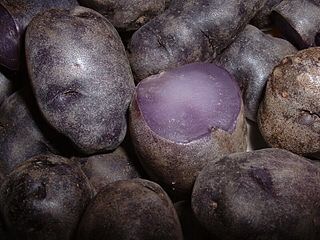 Also recently we were treated to a special lunch by our dear friend Annie, who hails from the beautiful island of Taiwan. For those of you who have never been, put it on your Bucket List. Taipei, as you might imagine, is not the most beautiful city in the world, but does have the most amazing Museum housing Chinese Artifacts, which Chiang Kai Shek Stole? or rescued from Mao just after the 2nd world war, thank goodness he did so , otherwise they would all have been destroyed during the cultural revolution . There are so many  wonderful articles, that there are just too many for them all to be on display at any one time. Also in Taipai there is an enormous Multi-Storey restaurant that serves nothing but Dim Sum, the best I have ever had, but it is possible to eat good dimesum , almost anywhere in the city so now you have at least three reasons to visit Taiwan., not to mention it as being a beautiful island. After all, it used to be called Formosa, the translation of which is Beautiful!
But on to Annie, she cooked us her version of a chinese meal, which I assume is influenced by Taiwanese cooking.  We started with fish cakes and  Taiwan influenced marianted chicken wings. this was followed by Dim Sum and then fine asparagus with shrimp,noodles with small onions and chicken,sautéed asian aubergines and peking duck, All was absolutly delicious and toppd off with homemade mango ice cream and fresh mangos.All in the name of Charity “The Alexander Devine Hospice”. Alexander Devine Children’s Hospice Service was founded in 2007 with the aim of providing a dedicated children’s hospice service for all children with life limiting and life threatening illnesses in Berkshire and beyond.