It’s that time of year again, we are in the mountains, but to be honest this year has been snow ( along with several days of rain but higher up, there will be snow). Being mildly incapacitated, Himself has become, nursemaid, cook, housemaid, chief bottle washer, and in fact Uncle Tom Cobley and all !

He has cooked very well, under instructions, not allowing me up to the cooking floor but keeping me well supplied on the lower level with wine, recharging my glass and asking instructions! Out of all of the meals, whether it be Tarte Abondance , Cheese Soufflé, or Cauliflower Cheese, he has absolutely surpassed himself, except on two occasions. The first was when he did not realise that there are several types of rice, hence ham and egg fried rice made with Carnoli rice ( Risotto) was a a trifle on the sticky side. The sauté de Veau, was however not his fault but the meat! Tough it was ! Too bad as the mixture of assorted sautéed peppers was great! And not mention the Moules ( Mussels) Provençal. Made with tomatoes, peppers, onions, garlic and of course white wine!And the piece de resistance was the fish pie. 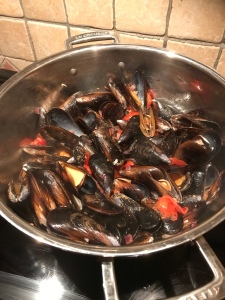 Dinner on the night of their arrival was none other than Raclette! Aka heart attack central, but oh so good and cook your own is the way forward. But, the following night Fish Pie. He did go a bit off script, showing some independence in his new found freedom in the kitchen. We had bought, salmon, cod and large shrimp, but let loose in the supermarket came home with scallops as well! The result, was outstanding, enjoyed by all.

We ventured out one day to Le Marché in Thonon Les Bains. It is about a 30 minute drive from our Mountain abode, on a road, that I would be less than keen on driving at night, twisty and turning, gorges on one side, mountains on the other, still on a sunny day, not too bad!

The market is busy year round, even when the temperatures are below freezing. In the summer of course, there are many 0more traders and many many more shoppers. Summertime, means usually having to park by the lake, upper parking is always full but also very claustrophobic. Down by the lake is usually not a problem and there is a funicular to take one up the rather steep mountainside. One could easily walk down, but of course by then one has shopping! So maybe not such a good idea! 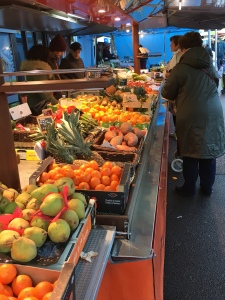 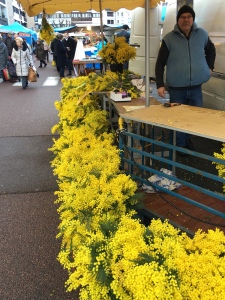 My interest is always with the food stalls. There is always a queue for fish, and I am amazed at the cost. I realise that cod has become endangered so become more expensive, but at €39-€45 a Kilo ! Wow, that is expensive! Cheese ( well we are in the middle of a cheese producing region) is always good value, and always a good selection of fruit and vegetables, usually more so and of a better quality than in the local supermarket.The one stand that is always popular is the cooked chicken stand, people stand in line, waiting for the perfectly cooked chicken. The only thing I can compare it to is either Marks and Spencer or Waitrose, both my local stores offer bbq cooked chickens, but not on a rack like these, but then also considerably cheaper, about £6.00 a chicken and in the market they are €10 upwards.

One vegetable that I was on the lookout for was Cardoons! They are not really well known in the UK. They are part of the Thistle family, the same family that includes artichokes. Whereas, it is the globe of the artichoke that is eaten, here is the stalk and leaves. I have only tried once to cook these, very much with mixed results. Himself declared “don’t bother, and not sure that I will but having found that they are now pre-prepared I might not give them another trial, not anticipating too much as even then, they do not look very enticing!

So back to fish pie, simplicity itself, but oh so good, made ahead of time and then baked to a golden crust, served with a green vegetable or a salad, what could be better?

Actually, although one could give an exact recipe, just winging it also works. In my house, or when I am cooking, it just depends on what I have in the freezer, so no two pies are ever exactly the same.

Take a quantity of fish, ( use, salmon, cod, Coley Shrimps, Scallops, haddock or smoked haddock) maybe for 2 people about a pound ( if any left over, it will keep or freeze for another day.) take some fish or vegetable stock or even better half bottle of white wine and poach the fish gently until cooked. Drain and pat dry but keep the cooking liquid. Boil 2 eggs so that they are hard boiled, peel and cut into 1/4’s. Then I always make my white sauce by the all in one method, in the microwave, into a microwave container put an oz of butter, along with an oz of cornflour, a pinch of salt and about a cup of milk, mix, put into the microwave and microwave for. Minute on high, stir and repeat, repeat this until you have a sauce, If it should go lumpy never fear, just beat and it will go smooth. If a trifle thick, thin using the fish liquid. Cook a couple of potatoes, again I cook then in the microwave, 1 large baking potato takes about a minute on high. Mash the potatoes with some butter and some milk. Now it is time to assemble, mix the fish mixture carefully with the sauce, so as not to mash the fish to smithereens, add the eggs. Pour into an oven proof dish and top with the mashed potatoes, this can be done by simply adding on top of the sauce and fluff it up with a fork, or try being posh and use a piping bag and a large nozzle and make the potato look a little more Sophisticated. Over this sprinkle some Panko Breadcrumbs and some Parmesan cheese.

At this stage it can be refrigerated even for a couple of days and then reheated until golden brown and hot.

You could be forgiven, for thinking that I only eat in amazing restaurants, as I seem to do so, on a regular basis. Actually, it could be a burger bar, or street food as in Bangkok or Mexico City, or a noodle bar in a remote village in Japan,or freshly cooked egg fried rice, as in a bus station , somewhere in Yunnan, as long as the food is good, then I am happy. But if they put themselves out there as being High End or todays by word”Fine Dining”, then they had better be.

So it might be a surprise to you, that we recently ate in one of Her Majesties Prisons, and we were very pleasantly surprised .

There are indeed several of theses establishments, well 4 to be precise, one in Surrey, one in Cardiff, one in Brixton ( London) and Styal in Cheshire, as well as a farm that serves the Surrey restaurant in a village called Send.

The idea of having a restaurant within a prison was the brain child of Alberto Crisci in 2009, and is now run as a charity . The aim is to give prisoners during their final months of incarceration professional job and life skills. It has been so successful that the re-offending rate has dropped right down, with 87% of graduates, managing to not re offend, but hold down a regular job.

Nowadays, inmates can apply to go on any of the courses that the Clink offer and they are always oversubscribed.

They learn professional skills, either in the kitchen, or the restaurant itself as wait staff, bar staff or as receptionist/hostess skills, they follow the GNVQ, NVQ and City and Guilds courses, so it is a recognised skill. However, it is a prison, rules and regulations apply. One has to register beforehand, then check in with a photo ID, along with having finger print taken, photo checked ( a bit like going though US immigration), diners have to arrive at an allocated time, no stragglers allowed. When every one has been checked, then we were allowed to go though security doors, etc into the restaurant itself. However all mobile phones, tablets, most of your money has to be checked beforehand, not allowed! The restaurant itself is very smart, nice tables and comfortable chairs.

We went with a group of people and the restaurant was almost full. There were separate tables for staff and as it was a Friday apparently Friday is extremely popular, Fish and Chips Friday!

Two very smart young men came to take ur drinks order, they all had spoof names, which made you believe you were really drinking something alcoholic, but no, no alcohol allowed, but at least the pretence means that staff learn the race, albeit, pretending to serve cocktails!

We had preordered our lunch, not sure if this is the normal process or not, but we had a very enjoyable three course lunch.

Our waiters were very professional, smartly dressed and very polite. I could not bring myself to believe that these young men were criminals, they could have been my son! The feeling left me deeply shocked.

Our menu was for a three course lunch, all of it beautifully cooked and served. I can thoroughly recommend a day trip to one of these restaurants. Not only will you have an excellent lunch but you will be helping an extremely worthwhile charity.

The graduates, are supported upon release by an extension of the charity, with help towards finding a placement as well as accommodation and setting up bank accounts. Many notable establishments give their support to this endeavour including The Royal Automobile Club on Pall Mall, where they have even given kitchen equipment to help get the charity up and running.