Skip to content
Oysters and Champagne in Food and restaurants December 13, 2020 675 Words

Here it is, the 13th December, it is over a week since we were released from our second Lockdown, and yes I’ve played some golf but not oodles, I’ve not gone shopping, I’ve not done my blog, so what have I done?

Well, first and foremost was and it happened, just as we were free, our Christmas escape, disappeared, snap, just like that. Firstly the train company ( and we had booked 6 sleeping compartments, over a year ago) cancelled as the drivers would be on a strike! Secondly, BA, ( dear BA which equals B***** Awful) cancelled our return flights, although they did put us on a later one, but if we couldn’t get there, we would have to cancel them! More vouchers ! And thirdly, the wonderful Scottish Castle cancelled us, despite having booked and paid a substantial amount 15 months ago!

Therefore, fast forward and Son in law was like a Knight in shining armour as he found an alternative! Ok, it might not have a moat, nor secret staircase, nor a ghost but it does have its own golf course, Private golf course! ( though it could be under snow ).

Of course, I have been cooking and even had lunch out one day, outside under the heat lamps, but it was still cold!

Today, I’ve made bread and a curry.

In fact it is a mackerel curry. Obviously not for me, but for Himself

He had mackerel for dinner the other week and declared, that maybe, just maybe, he was OFF mackerel, it was the after taste.

So what to do with the remaining mackerel in the freezer? Being of the maxim, Waste Not Want Not school of thinking, I was determined to find something to do with the remaining 4 fillets. Mackerel Curry sprang to mind. I wasn’t sure that Mackerel was a fish used in hotter climates as for me it is a cold water fish, from the Atlantic, North Sea, Norway ,and Iceland, but according to the guru of all things fishy Alan Davidson, a variety of mackerel is found in Mediterranean waters as well as the Pacific and Indian Oceans. Therefore although using cold water mackerel, I went ahead and made himself a Mackerel Curry.

For this is used and it makes enough for 2-3 servings.

Heat the oil, add the curry leaves and seeds, cook until they begin to pop, add the ground coriander, turmeric, garlic and ginger, cook for about 3 minutes. 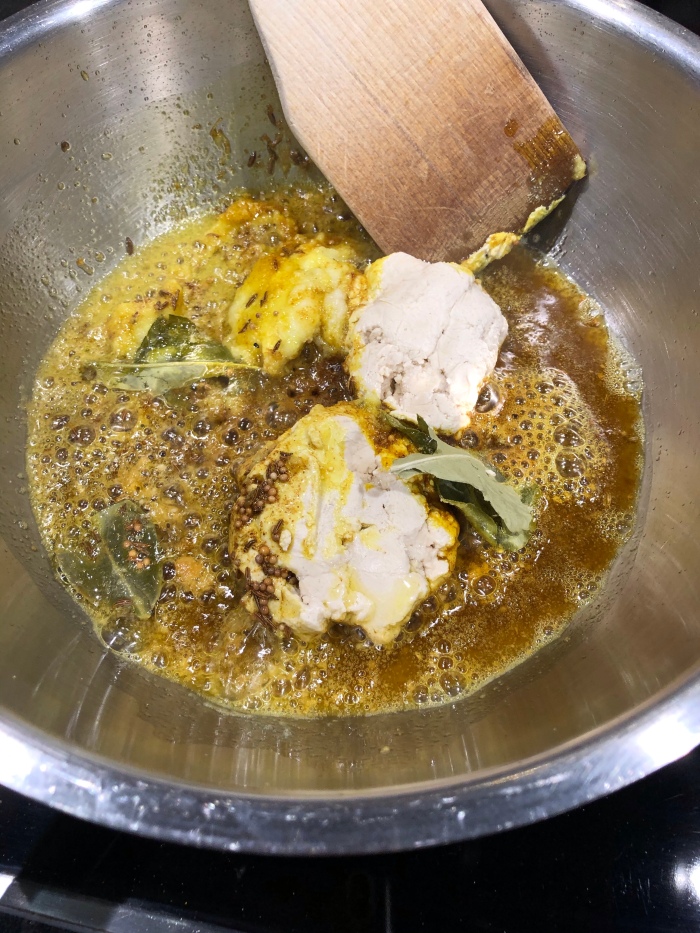 Add the tomatoes and coconut milk and simmer for about 15 minutes.

In a separate pan, heat some oil, dip the mackerel in some flour and sauté .

Add the mackerel to the sauce, and stir in gently. Season, add the tamarind paste if using, taste and adjust the seasoning.

Serve, with the fresh coriander.

Always fun messing about and trying new things! Many years ago, our au pair of the day, was ( using a very English expression ) GOBSMACKED, that I didn’t have a weekly repeated menu. She told me her Mums repertoire was the following:-

My mother once complained ” you never know what you are going to get in this house!” But where is the fun in that !!

4 thoughts on “Where does the time go?”