For the past couple of weeks, I have been in Catalunya, joined by himself for the last week. At this point I think I am a bit Tapas out, all of these wonderful sharing plates, I think one tends to over-ndulge just a tad, and not to mention the wine. Had no idea that the local wine was so more-ish, but it certainly is!

Girls On Tour ( golf that is ) indulged themselves in the local food. One of the Tapas which was served, was Snails, and I thought that these were in fact sea snails, so Winkles. However, apparently not but more in the form of Petit Gris, small snails. In the town of Leila, in the centre of Catalunya there is every May a festival (L’Aplec del Caragol) dedicated to Snails, which unites 12,000+ “Snail Clubs“! One way of serving them is “a la Catalana”a typical tapas where they are served in a thick, sauce of tomatoes with finely chopped onion, red peppers, almonds or pine nuts, chopped ham or pancetta, and chorizo with paprika. For me they were indeed very tasty, though a bit fiddly, but I think that the majority of the girls were less than impressed. This was the one and only time that Snails were on the menu! 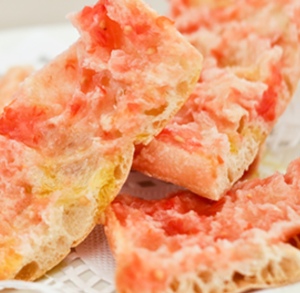 One Tapas which appeared more or less on a daily basis was “Pa amb Tomàquet” , Catalan tomato bread. This obviously can be made with sough dough or baguette, but in Catalunya it is made with, what is called Crystal Bread, similar to banquette but has more water. A very simple snack to make

Toast the bread over open flame, if possible, but just toast will do.

Consequently, we ate copious amounts of ham, tomato bread, mussels, sardines, cod and prawns and drank equally copious amounts of Spanish wines. One dinner my starter was Mozzarella di Bufala Campana . Absolutely delicious, would choose it again, and another was fresh fois gras. 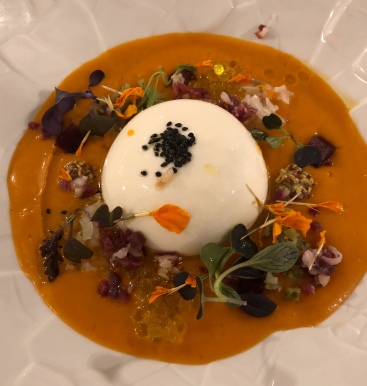 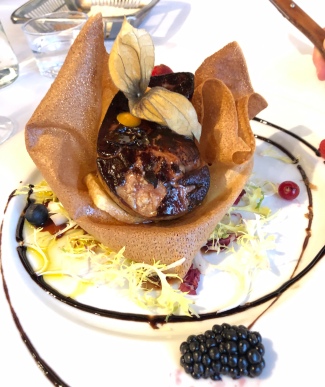 If I had known it to be so wonderful, I would have chosen it for both starter and main ! All of our restaurants were a bit of a shot in the dark, I was choosing them for a group of 16, boys and girls, with different tastes, a non drinker ( she was easy ) , a non fish eater ( more difficult, lots of fishy stuff on all of the menus) one who was gluten free and allergic to garlic, one who really only like his roast dinners, and the list goes on.

Nonetheless the less, we ate in two very good restaurants in Girona, twice in our hotel, which worked out well and once which really was pot luck, but Mallorquines turned up trumps. With no set menu available, they served the 16 of us perfectly, starters all came together as did the mains. This is the home of the Fois Gras and 8 of us chose it ! Umm Umm! 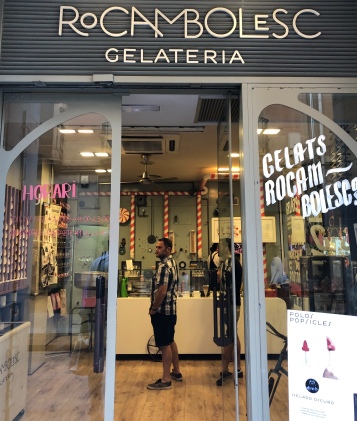 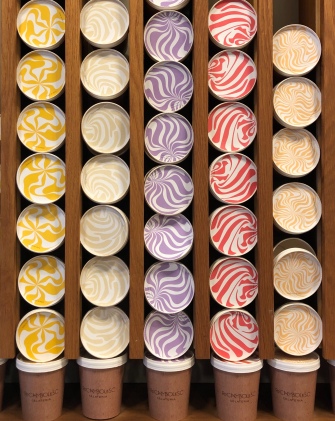 Four of us, had tried months ago to have a reservation at El Celler dan Roca, a three Michelin starred restaurant in Girona. All to no avail. Not wishing to give up entirely, himself and I tried the restaurants own ice cream shop. Worth the trip, no not really, only 6 flavours, and those not very exciting.

Himself and I moved onto Barcelona, did the usual tourist viewings of everything Gaudí.

We also of course visited the market, which is of course to my mind a wonderful place, and after touring La Rambla, looking at more Gaudí buildings and Miró tiles in the middle of the pavement, we returned there to have  dinner.We chose quiet by chance Bar BOQUERIA, which our Catalan friend subsequently told us, it was the best.

Service was fast, cooked to order and with a smile and a joke. we shared the Squid to start, and then I chose their Speciality, Fish and Chips, Their way. Now Fish and Chips would be for me, if I were the condemned man, my last meal, but it would be equally awful, to be condemned and to have something that was covered in a slimy batter, soggy chips and everything greasy. So this was a real test and it WAS Perfect. a selection of fish, Whitebait, small sardines, a small flat fish, chunks of cod in crispy panko crumbs and Chips to die for. Perfect! Himself chose the giant prawns, and for once I did not have food Envy! 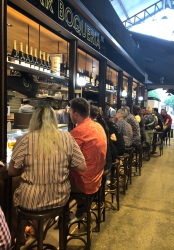 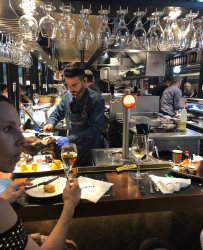 The bar was full and the chefs were kept busy. someone had the octopus, which was beautifully arranged.

The following day we dined with our Catalan friend and his American wife, who were in Brussels with us a lifetime ago. Once again we had the tapas and then himself chose the Oxtail. I have often cooked him Oxtail, but this was a notch above my rendition, served beautifully on a bed of creamy mashed potatoes, so I can see that next time I cook it, he will expect mine to also look like this.

3 thoughts on “Catalunya and Tapas galore”