Skip to content
Oysters and Champagne in Food and restaurants July 4, 2019 616 Words

Occasionally, I make the mistake of asking Himself the question “What would you like for Dinner?”

I say,  Mistake, as he always comes up with some phantasmagorical answer. He mutters, well I really liked the pasta  dish you made last night, or a Stir Fry ( what does he mean by that?) or Steak and Kidney Pie or Pudding ( for one person, I don’t think so) and so yesterday, he said Liver and Onions. He really likes liver, especially Calves Liver, and so I thought I would indulge him. Well, it was not to be, I went to Whole Foods, who can always be relied upon to have good meat, but not a bit of Offal in sight. SO that threw me a bit, and I wandered into Marks and Spencers food hall as I needed Milk anyway.

Inspiration hit me, a Poké Bowl. I hear you ask, what on earth is a Poké Bowl. I first ate a Poké Bowl in The Ned, in the city of London. The building itself is worth a visit, it is part of the SoHo House group but was designed by Sir Edwin Luytens (NED) over 100 years ago. It is a hotel but has 8 restaurants one of which is KAIA, and that is where I ate a poké bowl.

Poké is Hawaiian to slice, or to cut crosswise, and is one of the main dishes of Hawaiian cuisine. It moved across to mainland USA ( probably California in the 1970’s) and was predominantly served using raw fish, usually Tuna and Hawaiian spices. As with everything else, the traditional food becomes mainstream and cooks started adding their own touches to this dish that around 2012 it became popular in the USA and by 2016, the number of restaurants serving Poké rose to over 700. Cooks now added chicken, shrimp, avocado, Ponzu sauce, teriyaki sauce, mushrooms, onions, coriander, carrots, peppers and noodles. There is even a three day “I Love Poké Festival!”

And so it was, in Marks and Spencers, I found my inspiration, egg, noodles, coriander and bean sprouts. This is the Ultimate, make up your own poké dinner. This is a rough guide. 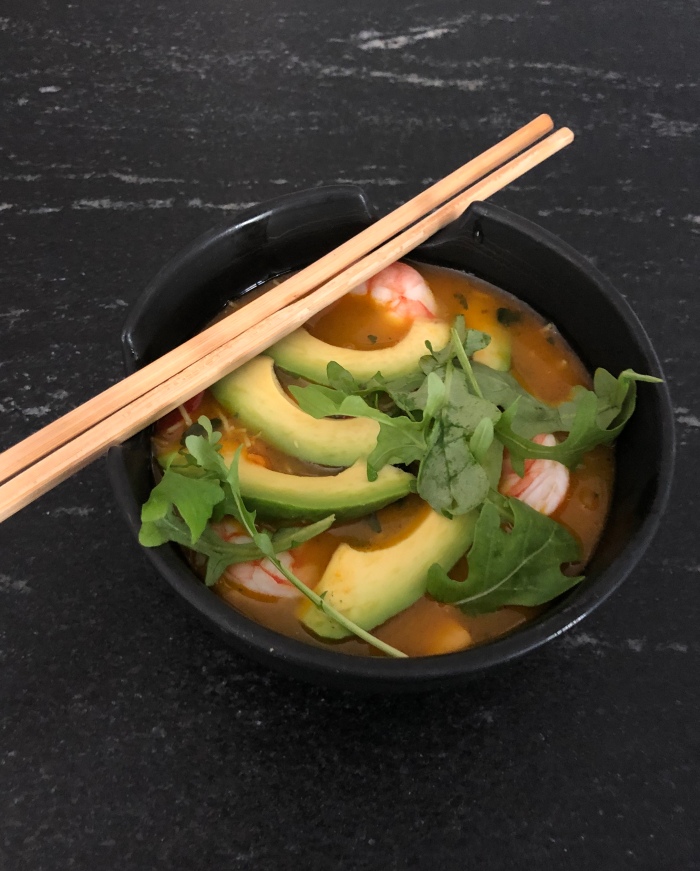 Start by making the stock,

Not sure how authentic this is, but certainly tastes good and looks good, so much so that himself said after one bowl, “Please ( sir) can I have some more!”