Skip to content
Oysters and Champagne in Food and restaurants February 24, 2019 1,038 Words

Here in our Mountain home, we inherited quiet a large chest freezer, which I have to say is usually pretty full. I’m not really a meal planner and I am also not a food throw awayer! Hence there is all sorts in my freezer. When I make a gravy ( always from scratch) or a sauce, there is always too much, then the rest is packed and frozen for future use.

I am one of those weird people who actually likes grocery shopping, not the run of the mill stuff, but I am always curious to see what else is out there. For a while, it was possible to buy, garlic, small ones that were indeed a whole clove, so easy to use, but it has gone the same way as many new food fads, GONE, nowhere to be seen. However, as I have said before grocery shopping here is not such fun, and can be a chore. Very often it is a better bet to buy frozen vegetables than fresh. Fresh very often is not very fresh and the shelf life very short indeed ( unless you are an avocado, then the shelf life is forever, as the last ones I bought were still rock hard after two weeks!) but the lemons I bought at the same time were, well only fit for the bin!

And so it was declared ( by me that is) cardinal rule number one is, ” when I ask what should we have for dinner” himself MUST not under any circumstances come up with some off the cuff random idea that I will not entertain, simply because it is Not In The Freezer!

That being said, I can certainly be very creative with What is in the Freezer! And so it was that we came to be eating Peking Duck!

Yes, we had a crown of duck sitting patiently in the freezer waiting for someone ( me) to declare “And tonight we will have duck !”

I have made Peking Duck before , probably in a former life and I seem to remember having two car jacks ( the same ones that I used to use to hang pasta on, in the days before a pasta dryer rack was available) with a wooden broom handle balanced on them, and on it hung my duck , which needed a daily application for several days, of a sticky concoction applied with a paint brush, to give it, when roasted, the wonderful crunchy skin, that is a requisite for Peking Duck! However, back then in Brussels, it was also very easy to buy all the necessary ingredients to make such a dish but not so even today in the French Alps! When I commented to a Chinese friend that I had made the Chinese pancakes, she laughed and said, Who makes them, in China we just buy them and the same goes to any major city, which has a China Town!

But alas, in the Alps no such luck, nor was the plum sauce available, but as luck would have it, sitting in the freezer was a kilo of plums, just waiting to be used! I had originally thought that they, when given to me last summer, were destined to become plum, jam, but now they were destined for a different future, Plum Sauce!

Mix the above and marinate the duck, preferably overnight but for as little as 30 mins.

Heat some oil in an oven proof frying pan ( I use cast iron for this, as it is also good on all types of hobs, including induction hobs.) sear the duck skin side down. Cook for about 10 mins, until the skin is very brown and crisp, turn them over, drain off the excess fat and pop under a grill for about 5mins, but be careful not to burn. Alternatively put into a hot oven for about 8 mins. 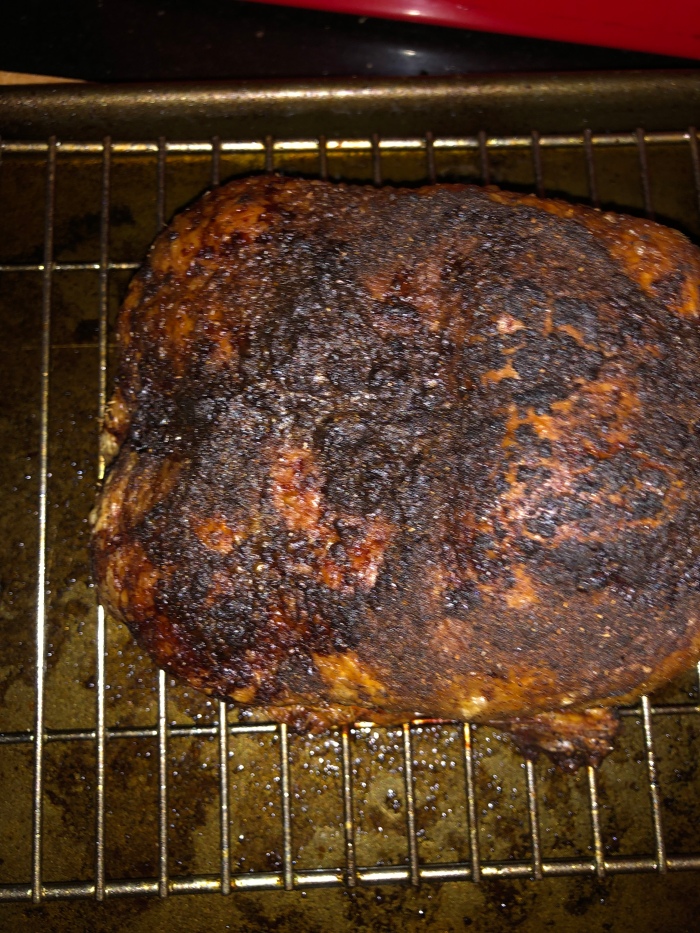 Before cooking the duck, you should make the plum sauce and the pancakes, so:-

I use a food processor, it makes mixing very easy. Put the flour and salt into the machine, mix the water with the oil and with the machine running pour in the liquid and process until the mixture forms a ball. 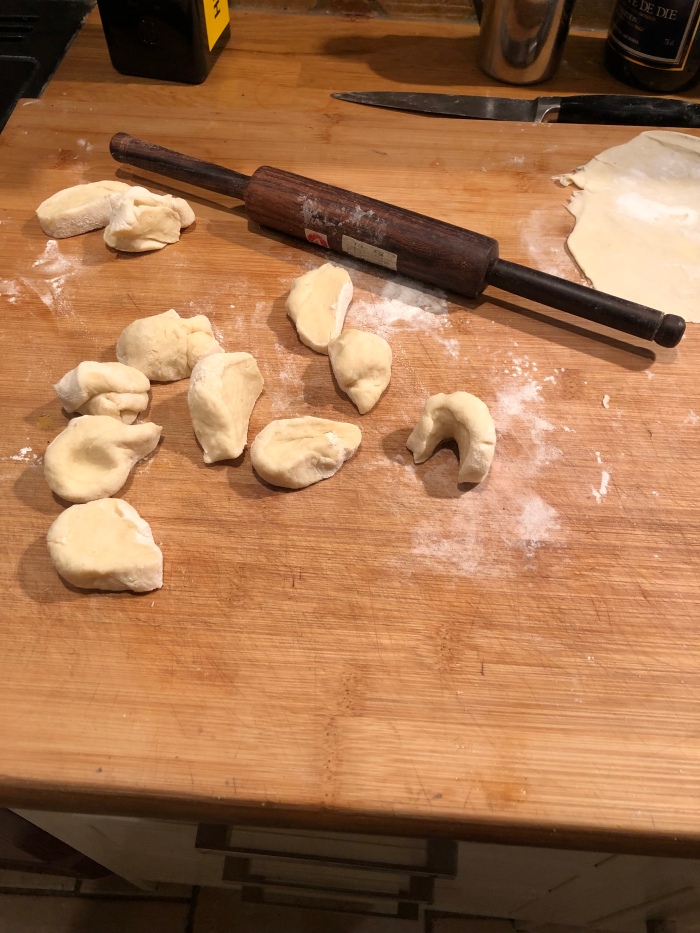 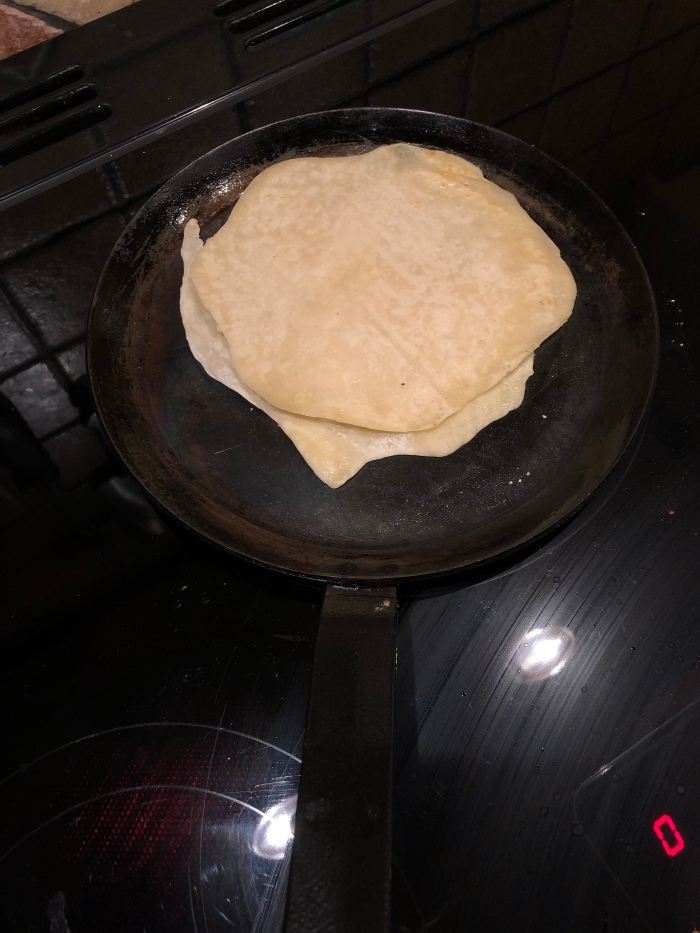 Knead the dough ( when it is cool enough to handle) until it makes a smooth ball, adding some flour if it is too sticky. Roll the dough into a cylinder and cut into 12 bits.flatten each bit of dough and rollout using a rolling pin turning it until it makes a round flat pancake about 6-7 inches. Then cook in pairs.

Brush lightly with oil and cook in a frying pan for about 30 seconds each side. Separate the two. Place onto a plate and cover with paper towel.

And for the plum sauce!

You can use canned plums or fresh to make the sauce. Obviously it is easier to use canned. Place the plums into a pan and add 2 tablespoonfuls of honey a pinch of ground star anise and 1 tsp ground ginger. Bring to the boil and let simmer, mash the plums to a pulp and let it simmer. When nice and gooey , stand to one side and leave until ready to serve.

Heat some oil in an oven proof frying pan ( I use cast iron for this, as it is also good on all types of hobs, including induction hobs.) sear the duck skin side down. Cook for about 10 mins, until the skin is very brown and crisp, turn them over, drain off the excess fat and pop under a grill for about 5mins, but be careful not to burn. Alternatively put into a hot oven for about 8 mins.

Now we are ready to assemble.

Remove the skin from the duck and slice into bits, slice the duck into bite size pieces. Serve on a platter, along with the pancakes, the sauce and some spring onions, some strips of cucumber and some hoisin sauce. Make up your pancake filled with duck , crispy skin and bits and pieces to your liking and enjoy!

3 thoughts on “The invention game.”