Our lovely part time neighbours in our tiny French Hamlet, invited us for New Years Eve ( Reveillon) and Carolin served us as a starter something which I often cook, but just as a vegetable, and serve it in puree form. Celeriac, is a root vegetable, which is a bit like the end of celery stalk. It is widely cultivated in Northern Europe , Asia, North and Central America and is a vital part of Puerto  Rican Cuisine. Locally, to me it is on the street market ( ethnic market) but  only on one stall on the upmarket Sunday Farmers Market. 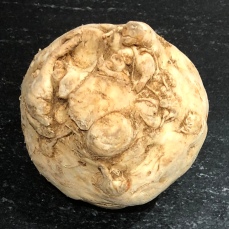 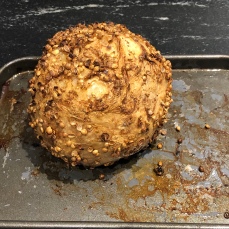 Carolin had, I believe,  baked it according to her instructions in the oven for about 4 hours, but just like Baked Potatoes, there is an easier way. I removed the obvious lumps and shoots and gave it a scrub ( usually a bit dirty) and then wrapped it in cling film and popped it in the Microwave on high for about 8 minutes , gave it a poke and cooked it for another 3. I then ( when it had cooled a bit so easier to handle) rubbed it all over with some olive oil, and some salt ( not too much ) and  then crushed coriander seeds. Then baked it in the oven at 200 C for about 15 minutes for it to brown. To eat, ( and I have to admit I kept carving off a slice and munching, as I found it to be very delicious) cut into slices and serve with a few spots of the thicker balsamic vinegar.

The next thing I did whilst in the Alps, was to bring out  the preserving pan, again and I made Marmalade. I read an interesting thought on why it is called Marmalade. It said that Mary Queen of Scots was in France and was unwell. To try and make her better, servants brought her some Marmalade, but all she heard was (” Ma’am est Malade “) Madam is ill but apart from anything else, it means we can always remember how to spell Marmalade correctly. The story although cute is probably incorrect as Marmalade came to the UK via Portugal, and as a quince paste. It is only in the UK that Citrus fruit Jams are called Marmalade, elsewhere they tend to be a generic JAM or Jelly in the USA.

Seville oranges are the orange of choice to make Marmalade, however on my trip to my local French supermarket, no such luck, but Clementines by the ton, so I opted for them. I used one kilo of clementines to 1 kilo of preserving sugar.

Peel the fruit using a potato peeler and keep the peel and remove the white pith. Chop the fruit and put in to a preserving pan or heavy duty saucepan, and for each kilo of fruit add one kilo of the preserving sugar. Add the peel as well and slowly bring to the boil and keep simmering. As I prefer my peel to be very fine, I then use a hand held blender to whisk it all around and cut the peel into very fine bits until the mixture reaches a jam Setting temperature which is about 120 C on a special Jam thermometer ; having such a thermometer makes life very simple and is worth the investment. I sterilise my jars by putting water in each one and Microwaving for a couple of minutes until the water is boiling, carefully removing them and putting upside down on a clean towel to drain,  I soak the lids, also in boiling water. ( you can use wax paper discs instead)  Pat them dry with paper towel and carefully fill the jars with the mixture. If you place your jars onto a wooden surface, they will not crack when you pour in the very hot liquid.  Seal with the dry lids and leave to cool. It is easy to see if the mixture has set, just hold the jar, upside down, if it does not move, it is set and ready to use ! 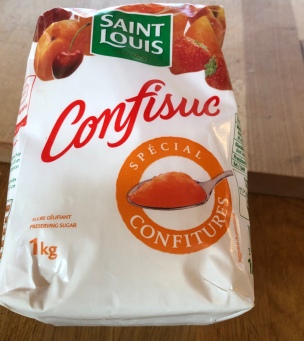