Skip to content
Oysters and Champagne in Food and restaurants March 7, 2021 655 Words

Well, yes, in a word. I have been collecting recipes or ideas and stick them into my Ben and Jerry’s Ice cream book. What ever the recipe says, I basically ignore it. It is just the idea that I am after. Ben and Jerry’s ice cream base is the way forward, it needs no cooking.

This week saw me making Salted Caramel Ice Cream. To be honest with you, Himself will eat almost any type of Ice Cream and if it is from Baskin Robbins, then usually the more lurid the better. Case in point, Blue Raspberry, Pink Raspberry, or Wild and Reckless! Not for me!

For the Ice Cream Base you will need:-

To make the base, whisk the eggs together until thick and fluffy. Add the sugar. Add the cream and the yoghurt and mix well together. As always I do this all in a food processor ( it saves on washing up). Put to freeze, either in an ice cream machine or simply in the freezer.

To make the salted caramel bit :-

Put all of the above into a pan and heat gently until the sugar dissolves. Bring to a simmer and let it bubble for 4-5 minutes, it will become thicker.

Serve with some chopped nuts or chocolate sprinkles, a swoop of whipped cream, if you feel a need for more cream, or eat straight out of the box ! 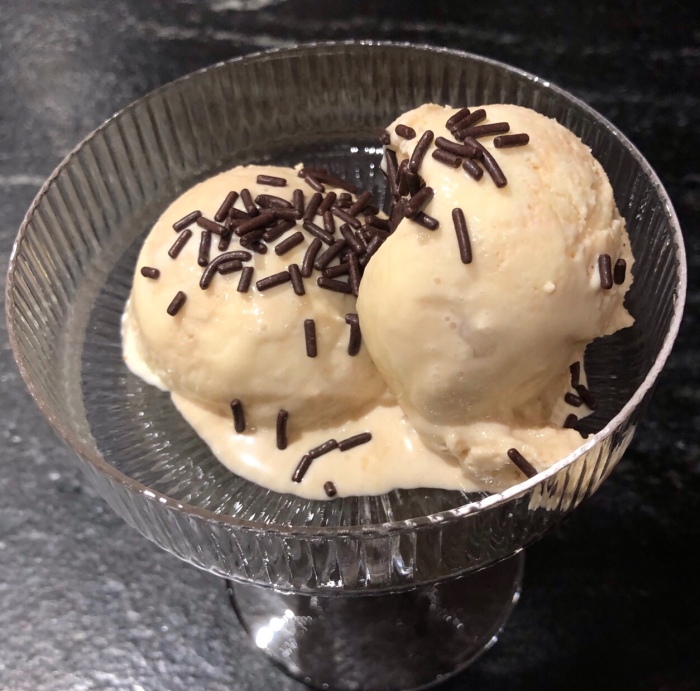 I’ve also made more gnocchi, this time using sweet potatoes. I think on balance I prefer the ones made with normal potatoes, but really not bad.

My basic recipe remains the same:-

Simply, peel and boil the potatoes, until soft, but not falling apart. Leave until cool enough to handle, and put through a potato ricer, or sieve. Mix in the eggs, cheese and salt, mix thoroughly..

Lay a sheet of cling film on the counter top and put a length of gnocchi mixture, ( like a long thin sausage) roll up and tie each end with string. In a large pan boil some water and drop in the ” sausages ” ( make sure they are submerged) and boil for about 10 minutes . Remove and pop them into a bowl with cold water. 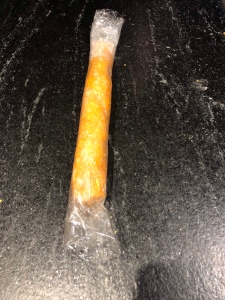 When cooled, remove the cling film, cut into slices about 1/2″ or so, dip each in flour and sauté in hot butter until golden brown on each side. Drain on paper . Here I wait until they are cold and lay all of them flat on a tray and flat freeze. When frozen, I bag them ready to use, as an alternative to rice, pasta or even potatoes.I usually make multiples of the recipe.

The other thing that I am very much into making are Bagels! I have to admit I was a bit wary at first, as having tried to make them many years ago to disastrous results, I was reluctant to try again, but now, I think I have it cracked. Commercial bagels are cooked in Lye and water, but umm maybe not to do at home and the alternative seems to be very simply just add some baking soda to the boiling water! Seems to work !