Here in London, signs of spring, there are daffodils and snow drops along with hellebores in shades of pink, purple and creamy green. There are catkins, sticky buds and the beginnings of blossom as well as primula and of course MUD. Brighter mornings and later evenings all heralding spring . Yippee is all I can say.

Meanwhile, we have celebrated Chinese New Year, the Year of the Ox, with spring rolls, stir fried noodles with vegetables, pancakes and Peking Duck.

I also made a Charlotte! Have not made in many a year, but there were apples and fresh rhubarb crying out to be used. For those of you who do not know what is a Charlotte, well I think it is best described as a fruity Bread and Butter pudding. Instead of bread I used brioche buns out of the freezer, sliced in to four slices . There are to my mind, not hard and fast rules. I used four buns, soft butter to spread on them and equal amounts of apples peeled and stewed in some brown sugar and rhubarb, also gently stewed. ( I used 500 gram of each)

Simply butter the bread slices and line a dish with them, add a layer of the fruit with some of the juice, more bread, more fruit and if she with a layer of bread. Melt about 4 Oz of unsalted butter and pour over the top of the pudding. Bake in a hot oven for about 20 minutes or so, until it is golden and risen like a soufflé. Remove and leave to cool a little before eating. I have to admit that I got distracted and forgot the Charlotte until it was well done, but nonetheless still delicious.

Another item that I have not made for years and years are Doughnuts!, The last lot I made were like bricks but I have found a new recipe and it worked exceedingly well. In fact I was worried that I would hear a bang in the middle of the night as I had placed my dough in a container in the refrigerator and thought it might just burst out of the box, but all was well this morning. All I had to do was to let the dough come to room temperature, and then shape it into balls. This is actually easier said than done as the mixture is very soft, so it was really a case of dividing the dough into 12 portions, ball shape as best as possible, place onto a greased tray ready for frying.

Deep fry the balls, depending on size of fryer ( I use a wok) only for a couple of minutes each side in hot oil, drain and dredge with sugar.

If doughnuts are your thing,and feel like giving them a whirl then here is the recipe.

This is of course do-able by hand but if you have a mixer with a dough hook, great.

Mix the yeast with the sugar , it will make a very creamy paste. Add it to the water and the beaten eggs. Put the flour and salt into a mixer and with the engine running pour in the liquid. Let the machine mix and knead the dough. When smooth, cover with a damp tea towel and leave to rise to 2x its size. , mix the dough again either by hand or in the machine ( this is called knocking back) and put the dough into a container and refrigerate overnight. 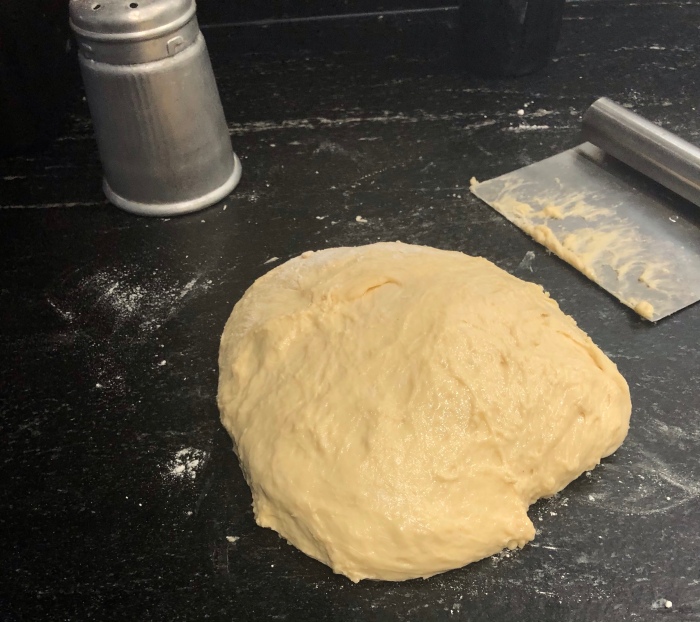 The next day, bring the dough up to room temperature ( I used the microwave on the lowest setting to do this, just a minute at a time) then , divide the dough into equal amounts, try and shape into balls and place on a greased tray and again , leave them to rise, they will double in size, so leave plenty of room between them.

Heat oil in your deep pan, and when hot enough slide the dough balls into the hot oil. They take only a couple of minutes on each side. Remove with a slotted spoon ,place onto kitchen paper to drain and then toss in caster sugar and place a on a wire rack. 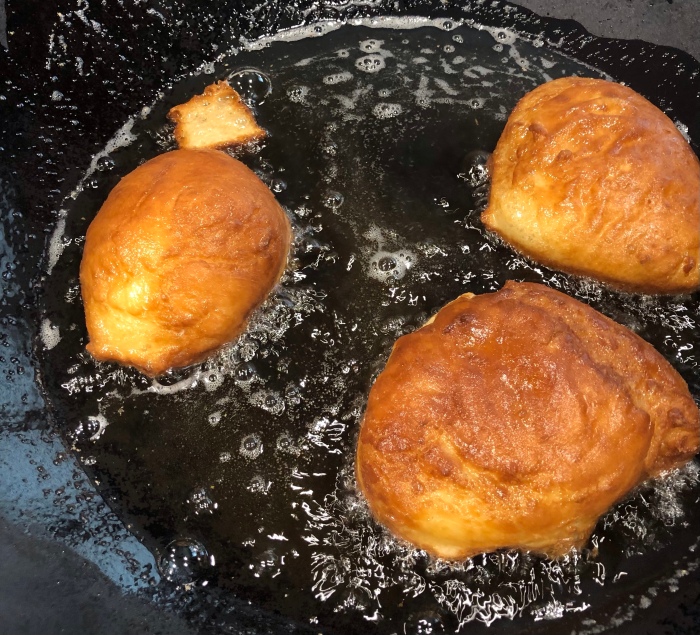 They can be eaten more or less straight away, but fillings can be added when cool.

Fillings such as whipped cream ( flavoured with cinnamon sugar, chopped stem ginger, melted cooled chocolate) jam, or cooled custard. The easiest way to insert the fillings is to slice the doughnut and add the filling. 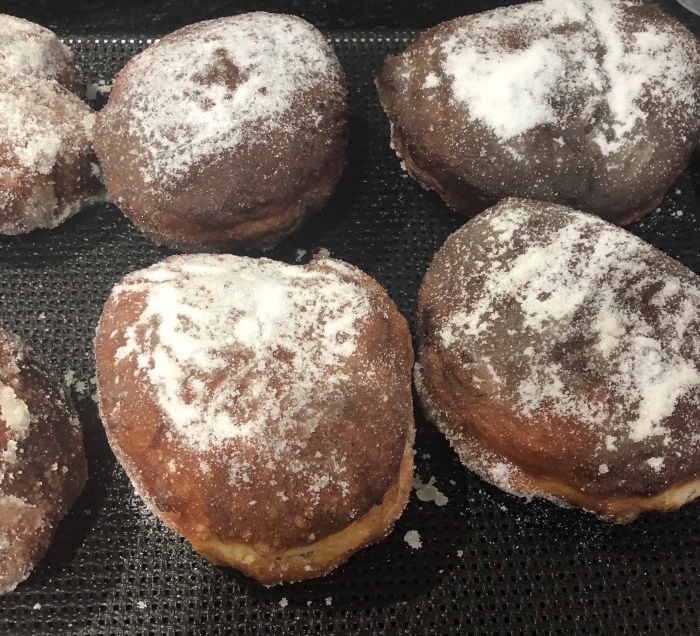 One thought on “Spring is coming!”