Skip to content
Oysters and Champagne in Food and restaurants May 26, 2020 774 Words

Here is a flash back to Week Nine, Day Seven.

Where I live in London, there is an absolute plethora of Fast Food stores, all catering to the mass of humanity that streams out of Baker Street Tube station every morning. Baker Street station is one of the stations that has remained open during this Lockdown with a few of the regulars still commuting, one of my neighbours a Dr, uses it to get to the hospital or our porters to get from their home to here. Or the young girl who works the early shift at the local grocery store. Otherwise Baker Street has become a ghost town . The buses, although reduced in numbers still plough their way up and down , usually with no passengers and all but one of the eateries is closed. The one that stayed open is Joe the Juice, not Macdonalds, not Kentucky Fried chicken, nor Starbucks nor Pret, but just Joe the Juice, where even one of my neighbours goes in the morning to get her caffein fix! Take away only, but you must have their App. Normally, parked on Baker Street is a whole army of delivery drivers, Just Eat, Deliveroo and Uber Eats, they are all there, still but reduced in numbers.

I read the other day that some people in London during this Lockdown have ordered Breakfast, Lunch and Dinner, from Takeaways, and why not when even Michelin starred restaurants are offering such a service. No doubt all the hustle and bustle will return soon, shame really I have been enjoying the tranquility of being in Central London.

Saturday is my day off, though I did cook breakfast, the Eggs Florentine. When asked what Himself wanted to cook for dinner, as it was his day to cook. His immediate response was ‘a noodle type dish, as served in Wagamama ‘

Quelle Surprise, I just happened to have a Wagamama cook book. Bought especially because my grandchildren really like Wagamama, so I bought the book. It is full of fun dishes,which are easy to cook and Fast? They have to be Fast. If you have ever been to Wagamama you will understand. All food is cooked to order and comes when ready, so apart from having everything pre-prepared, it is just assembled and cooked when ordered.

He also wanted his dish with noodles, normally I’d don’t “Do” noodles, but as it was his choice I agreed. This was after turning down in the past, things like Venison Stew, or Steak and Kidney, pie/ Pudding or Tripe, all things which I would NEVER choose to eat or order and that are things that he loves in his perverse kind of way.

And so it was agreed, it had to be Chilli Beef Ramen.

We basically had all that we needed, we had soft Asian noodles albeit not ramen. We didn’t have Bean Sprouts, nor did either of the stores that we visited. Otherwise everything was at hand.

Divide the noodles between the bowls, ladle contents of wok onto noodles and garnish with the chopped coriander. Very quick to make and very tasty.

A note on Onglet or as it is called in English Hanger Steak.

A hanger steak, is also known as butcher’s steak, is a cut of steak prized for its flavor. It comes from the plate , which is the upper belly of the animal. It was often called “butcher’s steak”, because the butchers would keep it for themselves rather than offer it for sale. Why? Because they knew that it was one of the tastiest cuts of meat. 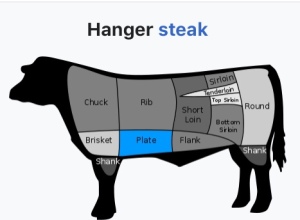