Skip to content
Oysters and Champagne in Food and restaurants April 12, 2020 350 Words

Today, Himself is on duty , but as it is Easter I decided to make Hot Cross Buns. I have never made them before and as M and S at Marble Arch has them in stock, I could have bought them, but I didn’t! Actually I don’t even really like them but never mind, on with the the task in hand.

I checked out the ingredients, had the sourdough starter ( and more frozen) had the bread flour, albeit wholemeal, had eggs and butter and spice, oh but hang on, dried mixed fruit and dried peel ! Oops no! But wait a moment I’ve just discovered a way of using up my jar of mincemeat from 2017! Actually by law these days all food items have to have some sort of date on them even items that do not go “OFF” like mincemeat, Christmas cakes and puddings and Worcestershire sauce.

I rarely throw foods away, fresh things like meat and fish I’m very careful with and pop them into the freezer before they have a chance of going bad, but other things such as jams, vinegars, worcestershire sauce, tabsco etc. they are fine!

I found a jar of mincemeat which is basically dried fruit and peel and brandy and so I heaped a couple of tablespoons of it into my bread mix.. 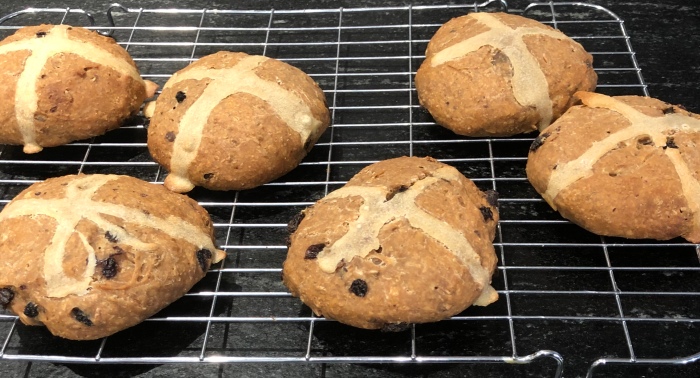 Hot Cross buns are best eaten fresh and warm but if you make too many they may be frozen, or just give some to the neighbours ( leave outside their door, ring the bell and leave)!

We had them for breakfast, a yes or a no or a maybe, especially as they were made from sourdough, and took a long time to make.

Hopefully I will not have to bother again next year, not to make and even  not to buy.