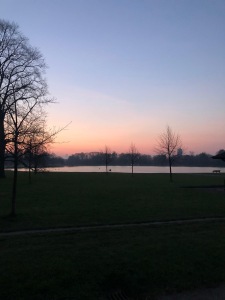 Today, I decided that as I have the time, I could sort out photographs. And what a mammoth task that is turning out to be. Several years ago, I embarked upon such a mission and got through a pile ( 1969- 1998 ) to be precise. That was probably before it was possible to make photo-books online, and now they have to be of a reasonable quality to be able to do that. There are so many, that I no longer know the people in them nor the places where they were taken. This calls for serious culling.

One thing I did cull earlier on, in this enforced,”Stay at Home” was my cookery books. Cookery like all things fashion changes. Remember Nouveau Cuisine, that didn’t last for long but at least it was a good change, as gone were the  heavy  French dishes that dominated the culinary world. At that time British Cuisine was a bit of a laughing stock, especially for the French, but that has all changed, our cooking is up there with the best. 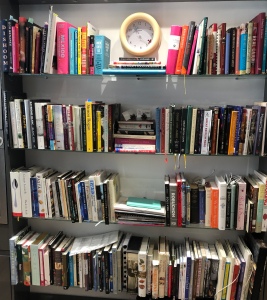 I no longer have scraps of paper, lying in files, waiting to be tried and tested, my recipes, and ideas all have their own Ipad, I use it solely as a filing system, and so when I see something that I really want to try out one day, I scan it in and file it. Of course that doesn’t mean that don’t get behind with the filing bit, I do, but plane rides is a good way to catch up.

One of my recent additions is Salmon with with Anchovy, Chilli and Caper butter. Simplicity in itself. So once again, thanks to the guys at ISH Fish, here is todays rendition.

Simply take your salmon, pat dry with paper towel. ( I then sprinkled some Sumac on the fish). Heat some oil, butter or better still Ghee in a heavy pan ( I always use my ancient cast iron frying pan, especially as it works very well on an induction stove top). When the fat is hot place the salmon in it SKIN SIDE DOWN and leave to cook, cover with either a splatter guard or some kitchen towel as it will spit. Just leave until it is obvious that it is cooked through. Meanwhile make the butter, by smushing a tin of anchovies, I do it in a Pestle and Mortar, along with some chilli paste and some soft butter, mix well together. Don’t like Anchovies? you will be surprised it is difficult to taste them here, but try doing it with garlic and herbs instead. 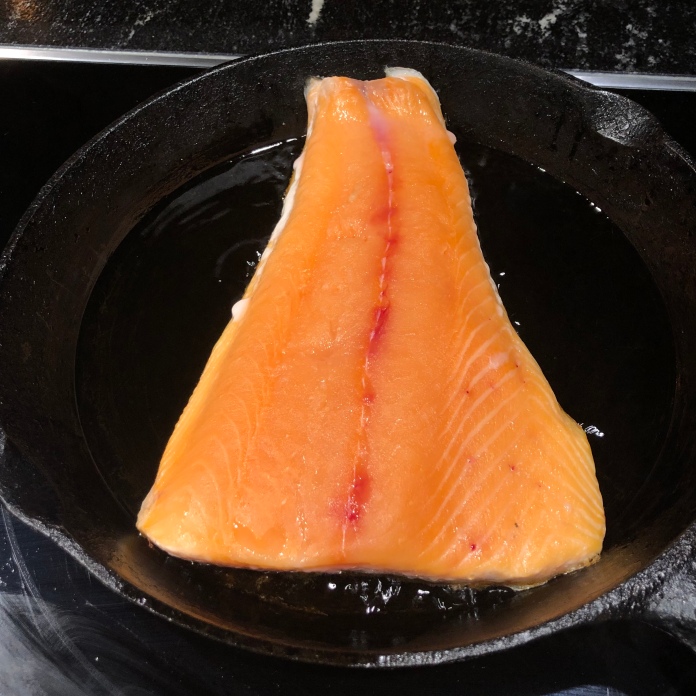 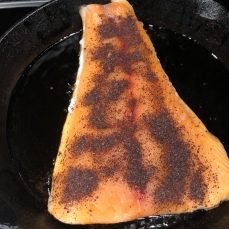 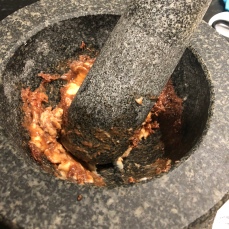 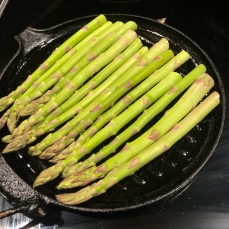 I served it with grilled asparagus, I like cooking them on my stove top grill, which is also ancient, or if I am cooking a lot of them, I am lucky enough to have Teppenyaki grill in the kitchen so I sue that, but wither way grilled is the way forward, they keep their colour and remain crunchy 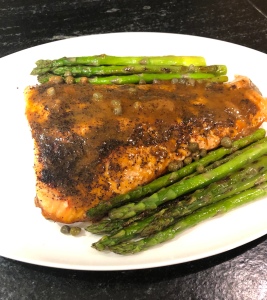 One thought on “Week Three, Day 5”