Skip to content
Oysters and Champagne in Food and restaurants February 16, 2020 528 Words

What did you do on Valentines Day? Here in the UK we say Valentines Day, the same as we say New Years day, whereas in the US it is “Happy Valentines” or ” what are you doing for “New Years”?

Anyway, however you call it, what did you do? Himself has been banned from buying me flowers for Valentines ( see just the one word) and No way Red Roses. However, he broke the rules, as he sets himself a mental check list and ticks it off in his mind…….Mission accomplished.

This year, and it is beginning to become a bit of a marathon. Two daughters, three granddaughters not to mention the wife! And he succeeded, job done for another year. Thank goodness we have Marks and Spencer delivery service.

What did I do ? Firstly, I bought himself some Krispy Kreme Valentines doughnuts. Not that he needed them, but he actually does like them, and they do freeze, if you are wondering. Then I had friends for dinner and the task I set myself was a red, or pink dinner! 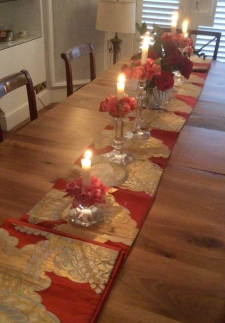 For starters we had, Crotin de Chavignol on salad with cherries, pomegranite  seeds, slivers of beetroot and raspberry dressing.

Main was Salmon en croute with sautéed beetroot, gnocchi on a tomato base and roasted baby vine tomatoes.

But my pièces de résitance were desserts. I actually rarely make desserts, I don’t need them but if I do make dessert it is usually something I can freeze, then himself can help himself!

Here we had, an Upside down Rhubarb cake,  Cheese Ice cream with speculoos dust and raspberries, Strawberries dipped in white chocolate and a Bleeding heart. Actually it is called a Cœur à la Crème, and is amazingly simple to make and looks beautiful.

The only problem with making this dish, is the mould. It does not have to be heart shaped, but would help, as it is a heart shape dessert. I have googled and found one, and I have listed it below.

Alternatively, take a silicon cake mould and using a skewer pierce several holes in the bottom of the mould. It is necessary so that the whey can drain out, which will make the dessert firm enough to un-mould.

To make a Cœur à la crème you will need:-

Beat the egg whites until very stiff. Beat in another container the cream cheese, sugar and cream together ( I use a food processor). Carefully stir in the egg whites until well blended together. Line the mould with dampened muslin ( or I used a new J Cloth). Scoop in the mixture, cover with cling film, refrigerate and leave to drain and set over night.

Puree the raspberries and put through a sieve ( get rid of those bits) Add the lemon juice and sugar to taste.

When ready to serve, invert the dessert onto a plate, pour over the raspberry coulis and serve.

Delicious ( BUT DON’T COUNT THE CALORIES )!

One thought on “A Bleeding Heart!”