Skip to content
Oysters and Champagne in Food and restaurants August 11, 2019 763 Words

Many many years ago, Himself ( way before we, were We) took himself off to Berlin to University. It was the days, of the Berlin Wall, where the S Bahn rumbled through the western sector of Berlin ( without stopping) but when it reentered the Eastern sector, Guards lined up with huge mirrors to inspect the underneath of the train, just in case there were escapees hiding underneath!

Himself travelled via slow train through East Germany and arrived at midnight and was starving, well it is all relative. Help was at hand as in the Central station, the restaurant was still open. At the time he only knew scientific German, not much help in day to day situations, but undeterred, ventured forth. Umm, didn’t understand a word on the menu , except, Steak ! Duly ordered, it came as raw steak, chopped, served with raw egg and Chips !

These days, things are very different, is fluent in German and would know better and one of his favourite dinners is Steak Tartare or some places it is called Filet Americain.

Nowadays, not so common to find on a menu, though I have to say that the Côte middle of the road chain in the UK does feature it and it can be served as a starter or as a main. Otherwise not so common, more the pity.

There are ways of preparing the steak,it has to be the best ( filet) and fresh. In France it is possible to go into any butchers and have it ground for you, even in our local, uninspiring supermarché. However if making it at home it is far better to sharpen your favourite knife and chop. The result should be finely chopped, with no sinews and no fat.

We went the other evening to a newsish restaurant in Les Gets. It is in an apartment hotel called Vina-Annapurna. It had great promise, it was a Jazz evening, and the group were very good, albeit way too loud to allow dinner conversation.

The menu is small both for starters and mains ( we didn’t look at the desserts). I chose, along with 2 others, the Tuna, which was delicious, even though a tad on the small side. Peculiarly, himself chose the Cheese, a slightly odd choice, but then he can be slightly odd. It was enormous, even as a cheese course, but for a starter. He ended up passing it around the table !

For the mains, David chose the Lamb, having been warned that he might remain hungry, , Lee and Carolyn the duck with Satay sauce, Katia, the trout with a sauce and Himself and I the steak tartare. 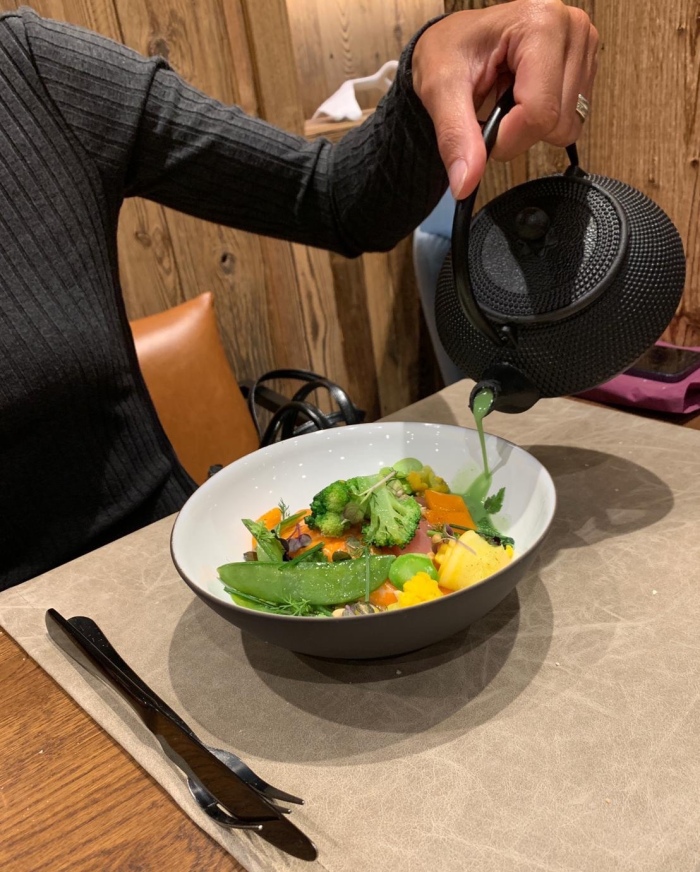 This we looked forward to with relish, only to be disappointed. The steak was in chunks with both fat and sinew, only two capers, no chopped onion, no parsley, ( even though it said with fresh herbs) ( having looked again at the photograph, there seem to be a few herbs! So minuscule, as easily missed! No sign of Worcestershire sauce, Tabasco or mustard,the last three are optional but my preference . The chips were very mediocre and as for the salad, a few scrappy leaves, a bit brown and wilted at the edges. After a few bites I handed over the rest to Himself who seems to have no such qualms about the quality of the beef.

The other dishes, were I believe good, the duck with Satay, very tasty and the lamb, cooked for 7 hours, which may explain why it had almost disappeared! ( ( apparently it was tasty though rather on the small side, and yes he was still hungry ). The trout in a sauce seems equally nice and the sauce interesting, made with Savoury as the herb. It is an old fashioned herb, which I actually have never come across, I am now on the lookout for it, might just have to grow my own !

So to quote Escoffier

Take a piece of fillet of beef ( or any other very good steak) remove any fat and sinews and finely chop the meat. Season with salt and pepper, here I add a small amount of Dijon mustard but this may also be added later.

Mould to the shape of a beef burger, make a small indentation in the middle and into it place an egg yolk. Serve with capers, chopped ( spring ) onion and chopped parsley. The following maybe served on the side, French mustard (Dijon), Worcestershire sauce and Tabasco. And of course Gherkins, but they must be small!

Umm wonderful ! ( only if it is made correctly). 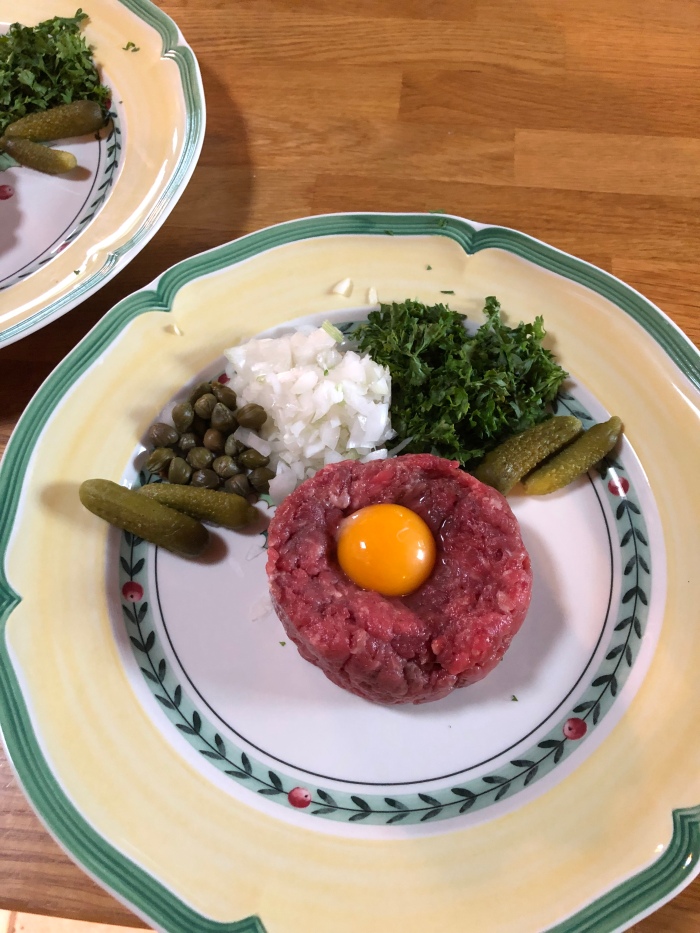 One thought on “Steak Tartare or Filet Americain?”