Here in the French Alps, it is like a time warp. The neighbourhood, at least in summer come out into the streets, and chat ( where do we do that in London? In the elevator maybe) but more than that the kids of all ages come out to play, wandering from one house to another, as their fancy takes them. And when I say kids they currently range in age from 2 1/2 to 13!  A big age gap but it does not seem to matter. French, Swiss, French/Irish, and my ex Mexicans! It doesn’t matter that they might not have seen each other for 6 , 9 or 12 months, they continue where they left off, a little older, a few more social skills but really just the same.

So, we are here with three of them ( the ex Mexicans), yesterday, there were 8 kids here and what do kids do, have a water fight of course! The girls said they won, and that is because they recruited young Sam to be on their team, and he is pretty mean with a water gun! Don’t get in his way, you will get wet !

The next adventure was making Slush Puppies, or Snow cones. A very American thing but oh so much fun and just think of those E numbers!! I bought a slush puppy machine, basically and electrified ice shaver, a bunch of paper cones and special flat ended straws ( easier to slurp up the ice) and three different syrups to flavour, Pink Bubblegum, ( sounds disgusting) , Red Strawberry and Blue Raspberry. Slush puppies made and Slurped to everyone’s enjoyment!

And so, onto today, today was the turn of the Eton Mess. As written about in the last blog, simple as can be. Sophia, the eldest child had made Meringues with her dad in the trade way, but was she surprised by this method, so much so, that she zoomed across the street and promptly made some more, which her grandad in particular really liked. Her Dad on the other hand sent me a text in the middle of the night about the sticky fingers everywhere! What else does he expect !

The only difference to my last comment on Eton Mess, is we used more icing sugar, and I assume that this was because I used larger eggs! Just remember the mixture must be stiff enough to roll into balls about the size of table tennis balls! Sophia commented that one of her subsequent meringues was on the large side( she admitted to making her balls on the large side!)

So get cooking with the kids, from 2- 15 they will love the instantaneous of this recipe! Don’t worry about the sugar, more veggies tomorrow ! 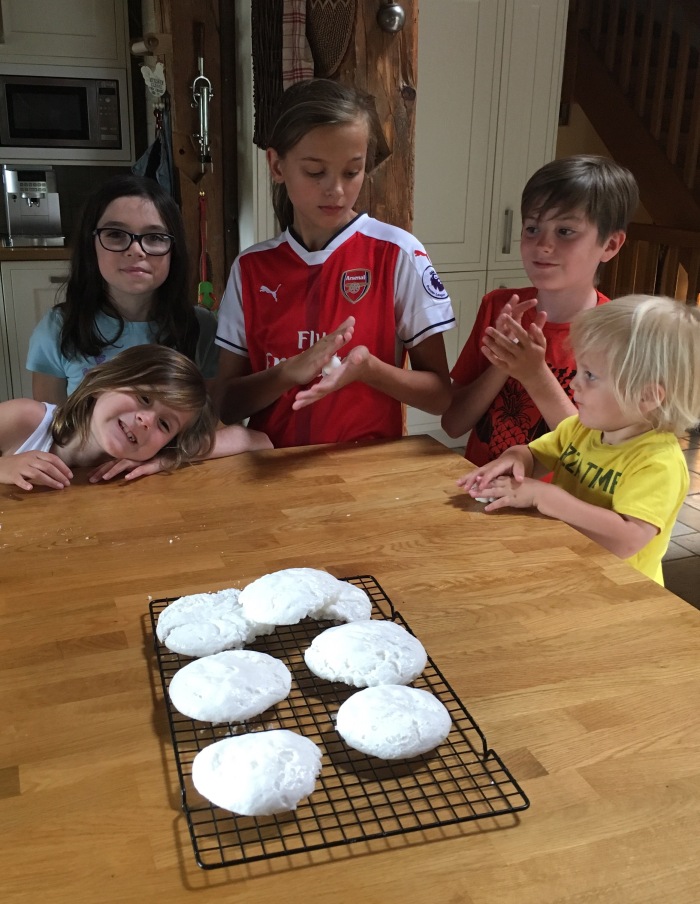