Skip to content
Oysters and Champagne in Food and restaurants April 29, 2016 390 Words

On our second evening in Kyoto, after a day of looking at beautiful Geishas, Bamboo Forests and Zen Rock gardens, we were taken to the equivalent of a pub.The EBISUGAWA ENRAKU down the back streets of Kyoto was very casual, and similar to a previous dining experience, we were all seated along a bar. Here for the first time since arriving in Japan, we had to order our own dinner. What consternation? Well it was until someone produced a menu in English.

The chefs here, were younger than most of the ones that we had encountered previously, but were still as diligent, especially when it came to carving food items  into cherry blossom petals. At this time of year it is all and everything to do with Cherry blossom. 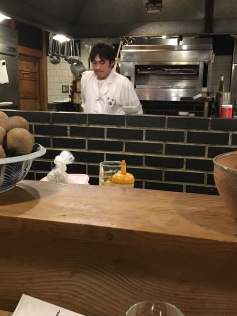 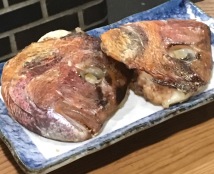 I think we all chose the boneless chicken, which was fine without being anything amazing. Several of us chose the Shrimp Tempura, and the vegetable tempura, but as everything was cooked to order, obviously it do not all arrive at the same time and so ende up being a bit of a scrum, to see who could ge to the Tempura first, was a close contest, between those who, had had their fill of raw fish and those who really liked the Tempura! The Korean Pancake was equally good as was the Spring Salad, which as the name suggests is only made in the spring with seasonal vegetables. One thing we had noticed on our travels was a lack of fresh fruit and vegetables, a lot of pickles but vegetables seemed to be restricted to a garnish, so this salad was a welcome change. 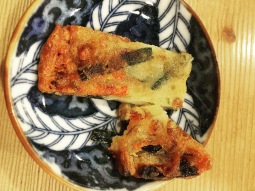 There were also some pregnant fish ( small fish of the whitebait variety) along with their roe and some sashimi, this was followed as always with a Japanese meal by rice and this time it was rice with tuna and spring onions.On the countertop were also some fried fish heads and some rather large pieces of octopus,we gave both of them a miss.

So day three in Kyoto is looming, we are going on a tour of famous sights and with luck we will see the Royal Palace, but is not open to th epublic very oftern and never on a Sunday, we shall wait and see !