Skip to content
Oysters and Champagne in Food and restaurants April 23, 2016 598 Words

Fortunately for us, we left Shiragawa-go early, which gave us significantly more time in Kanazawa. Kanazawa, is a city, situated between the Sea of Japan and the Japanese Alps. It is one of the few Japanese cities that were spared of the fire bombing that took place during WW2 and as such is a much prettier city than some of the others we have seen

The layout of the city has  changed little since it was laid out centuries ago, but the modern city was created in 1889, there was an earth quake in 2007, but little or no damage was done to  Kanazawa itself. There still remains, a temple area, a geisha area and a Samurai area. Although the geisha areas were “out of bounds” to the Samurai, they were patronised by rich merchants.

Kanazawa’s real claim to fame is however GOLD and in fact gold leaf. It supplies over 99% of Japans gold leaf and it can be found on lacquerware and on the Golden Temple in Kyoto.

Obviously on a relatively short visit to this lovely city , it is only possible to get an overview, but we did see the 21st century museum of contemporary art, which is well worth a visit but in springtime the trip to see, is the cherry blossom in the wonderful Kenroku-en Gardens, listed as being one of the three most beautiful gardens in Japan. Apart from the beauty of the cherry trees, there is within the park the SEISONKAKU Villa. It  was built in 1863 by the 13th Lord of the Maeda family for his mother , and is  ( according to  Wikepedia) one of the few buildings in Japan to display possessions of a Daimyo family in their original surroundings. The park, also seems to be a very popular spot for wedding photographs, and I can see why.

Over the road the visitor will find the Kanazawa castle park.There is a very splendid looking castle, but this is in fact a modern reconstruction as the original was burnt down in 1881. The reconstruction s exterior I assume is a good reproduction but we found the interior to be disappointing, because although the layout was correct, the whole thing was very modern,with beautiful construction techniques to allow for joints to move in case of an earthquake.

Moving on to dinner, we ate in a fine restaurant were overseen by Madame, the wife of the head chef. It was called Tsuruko and is listed as being a Kaiseki restaurant. Kaiseki is a traditional multi-course Japanese dinner is equal to west Haute cuisine, or fine dining. 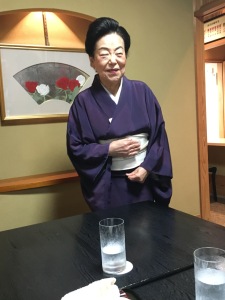 We had 9 courses, 6 of which featured seafood and mostly raw at that. Too bad if you were not over keen on raw fish but it was so beautifully presented and to my mind was just wonderful and as for himself,  he could not agree more.. I will list the courses, and see if you can work them out! 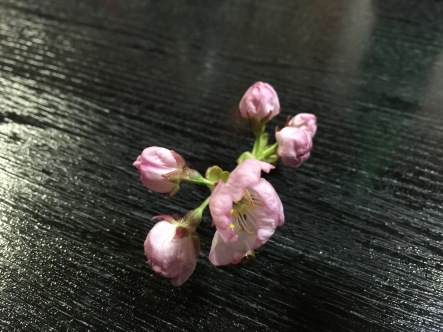