Skip to content
Oysters and Champagne in Food and restaurants June 1, 2015 659 Words

I read recently that the grandmother of a Sunday Times columnist, sent her deconstructed crumble, back to the kitchen, for it to be reconstructed! I have a feeling that Gandalf the Grey, ( one of my sources in Mexico City,) could well do the same. He along, with Himself are great connoisseurs of Crumble and  our truly  Scrumptious is being well schooled in the art of the perfect crumble. Crumble is a bit like marmite, you either love it or you hate it, and if you love it, then do not mess with it!

Our little 5 year old Truly Scrumptious makes the perfect crumble in lieu of birthday cakes, but visits to various restaurants recently have left us in despair, well not me personally, but Gandalf the Grey and Himself.

We have eaten in several up market restaurants in Mexico, mostly Mexico city, we make it a point on each visit to try somewhere new. Our sylph-like blond and Gandalf the Grey are the prime testers. So this time out we tried Quintonil, located in Mexico City’s upmarket Polanco foodie district. Since opening in 2012, it has quickly established itself as one of the stars of the dining scene in the city. Head chef and co-owner Jorge Vallejo studied at the Culinary Center of Mexico and spent time at Noma in Copenhagen, and then  three-years at the acclaimed Mexican restaurant Pujol ( see previous blog).

The restaurant actually does not seem to advertise itself from the outside, it is very low key. Inside there is a garden area, which would be the seating of choice, but it is small and understandably is in high demand. The interior is also on the small side, but appears larger with the whole of one wall being a large mirror. It gives diners ( male ones) the chance to check out all of the fashionistas at leisure and without being too obvious!

The restaurant serves modern Mexican but innovative cuisine, not suprising given the chef’s Noma background, and will include such items as Huazotles, really a weed, but akin to the broccoli family as well as Cuitaloche /Huitaloche. Cuitaloche, is a fungus that grows in ears of sweetcorn, Mexican farmers also call it ” El oro negro”, black gold. When cooked it becomes a gooey tar like mush, which maybe the rest of the world would throw away, but mexicans love it. ( my blond will not give it a sniff) ! 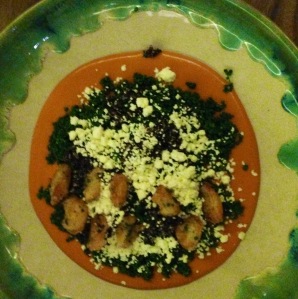 Quiintonil, has two set menus from which to choose as well as a la carte. there is a 7 course menu as well as a nine course one. Needless to say the portions are small, but exquisitely cooked and served. Until we came to the crumble that is.

As pretty as this might be, it is certainly in no stretch of the imagination, a crumble  , but as I have said, the young lady called Truly Scrumptious, does make a dessert that is truly a crumble.

She makes it the traditional way, by rubbing butter into flour and stirring in the sugar ( usually 1/2 butter to flour ie 4 oz flour, to 2 oz butter and the same again of sugar), and then sprinkling it on top of apples and blackberries, or rhubarb, those being the crumbles of choice. Gandalf the grey and Himself, like the slightly guey mixture that 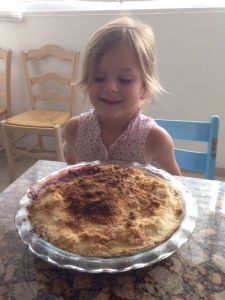 results from the flour mixture combining with the fruit, during the cooking process.

Raymond Blanc however, ( and I ) prefer the cook ahead method, where the crumble mixture is spread on a baking tray and pre-cooked, ( stirring a couple of times during the cooking process, to ensure even cooking). This can then be used immediately, or frozen until required. If using this method of making crumble, then it is also preferable to have precooked the fruit, to avoid over cooking of the crumble. By this method it is possible to make a summer fruit crumble year round by using frozen summer fruit.

4 thoughts on “ When is a Crumble, not a Crumble? When it is de-constructed!!”