Yes another dinner, from a different continent and different country but in the same restaurant. Hard to beleive, but true. The private restaurant on Londons Pall Mall,  hosted the dining experience from Benares and then last week, hosted  a dining experience from La residencia’s El Olivio, which is normally found in the town of Deia, Majorca. The setting there is beautiful as is the restaurant itself. Dinner is served on the most wonderful assortment of colourful glass plates. My best friend from Houston Texas was visiting, she too fell in love with the dinnerware, so off we went to buy some for ourselves. I have to say we did not buy any. Firstly it was fairly expensive, but cost aside, it weighs a ton and so to export it either as hand luggage or to ship, would not be a reall viable option, Ah well dream on.

Our visit to La residencia in London, actually did not happen. Having discussed with the restaurant before hand that two of our party were pescatorians, we were assured that there would be suitabel options for them. Alas it did not happen. The set menu which sounded wonderful, was available for the tabel as a whole, but when we enquired about the non-meat option, we were told PASTA!!!, I have to say, I was really not pleased, firstly not an option on an already fairly expensive menu and secondly, hardly Spanish.

Consequently we all were required to take the a la carte option. Having eaten in this restaurant several times, we were not disappointed in the food, far from it and the waiter went to great lengths to ensure were happy and were in fact served a course from the El Olivio menu,  ( the tartare of Wild Sea Bass )  which was delicious.,  we also had a smapling of the dessert from the menu, which was crispy cannelloni stuffed with white chocolate mousse and served with passion fruit sorbet. Our guests, had sampled once before, whilst in Spain, crispy cannelloni, and were interested to try it, as they had not been overwhelmed previoulsy. However this time round it was a hit.

So despite our disappointment at not being able to try  El Olivio’s food once again, our dinner was very good and you can see below. Our extra course was the the Tartare of Wild Sea bass, followed by fillet of sole, Turbot, Hereford Beef or Veal Cutlets. I personally chose the Veal cutlet, which was really tasty.

Todays veal industry has changed and is no longer the pariah that it once was. “Rosé veal is 100 per cent welfare friendly in the way the animals are reared,” The world is short of food and it’s  a waste for bull calves not to come into the food chain, previoulsy they were just slaughtered, as there is only one Bull per herd, otherwise they would all be fighting pover the cows!  ﻿ 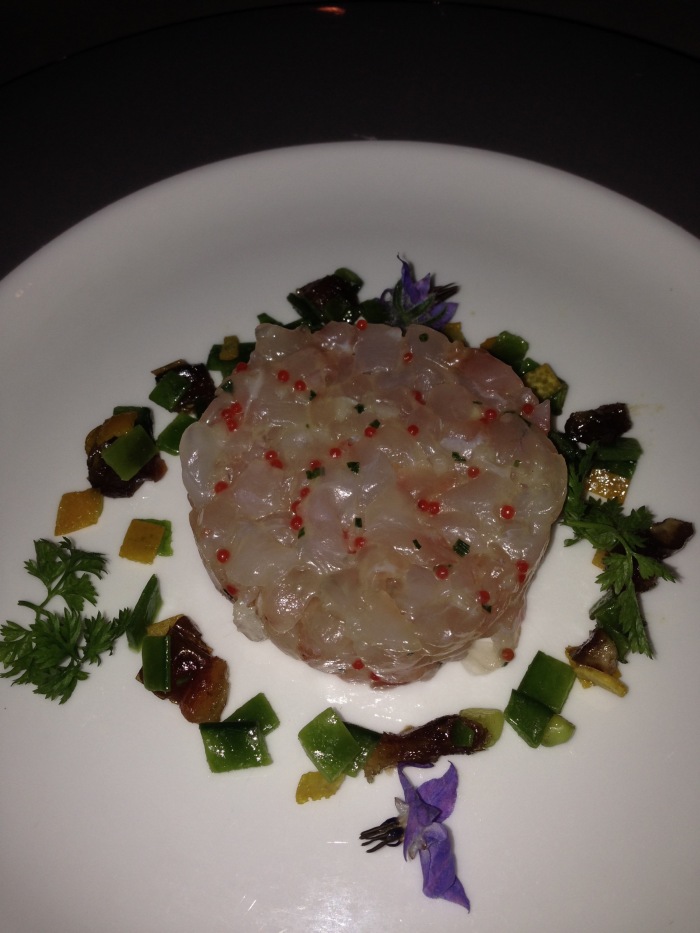 ﻿Rosé veal is similar to beef but with a smoother texture, a richer taste and is lower in fat and cholesterol. While it is available in the same cuts as beef – steak, roasting joints, escalopes, mince and casserole meat – there are additional specialities such as liver and shin (Osso Bucco).