Last week was Halloween and here in the mountains, it was celebrated by the local children as well as the imports who were here for half term. Even the children in the market were suitably dressed. The neighbourhood children came and carved pumpkins and with the insides, I made curried pumpkin soup. It started out as roast pumpkin, but Umm, not much flavour, so it became soup. I also made toffee apples, as prizes for the pumpkin carvers. I have not made toffee apples in years, but was very pleased with the result.

8 small apples, ( I like to use, crispy apples which are not too big, the fun size ones are ideal)
2 cups white sugar
1 teaspoon teaspoon vinegar, white is best.
1/2 cup water
6 wooden chop sticks, cheap ones are available from oriental grocery stores, wooden skewers are not strong enough

Method
1. Put some greaseproof paper on a baking tray or chopping board.
2. Wash and dry the apples and insert  the chopsticks into each apple.
3.Put the water, sugar and vinegar in a small heavy based pan.
4. Bring the mixture to the boil and heat to boiling and simmer for about 20 mins. Ilf you have a sugar thermometer, heat the mixture to 150 C, but at this point DO NOT GO and chat on the telephone, the mixture can burn easily, it needs constant watching and shaking. You can test the readiness by dropping a teaspoonful of the mixture into a cup of cold water, it should be hard and crack when tapped.
5.Remove from the heat and let the mixture to stop bubbling before dipping the apples,one by one, tilt the pan if need be.
6. Rotate the apple, letting it drain a little then place on the greaseproof paper. At this point do not Lick the spoon, it will be very HOT, so be warned!

It’s Thursday, so it must be Egg and Chips! No never!

Here is quick and easy mid week dinner, well we had it mid week, but maybe more suitable for special friends and for Sunday evening ( we do not “do” Sunday Lunch, except on very rare occasions).

2 x 6oz Filets of Venison, but could use filet steak

Heat some olive oil in pan, add the mushrooms, garlic and parsley and simmer gently, the mushrooms will absorb much of the oil, add more if need be, let them brown slightly. Heat a knob of butter in a frying pan, along with an equal amount of olive oil. When hot, add the fillets, and sauté for 4 mins on each side, this will give you a medium steak. With the steak still in the pan, pour over the whiskey and if you dare set fire to it and flambé the steak, quickly remove the steaks from the pan, add the cream, a quick stir, a pinch of salt, put onto plate top with the mushroom mixture. Serve with sautéed potatoes and a salad. Perfect!

During our self imposed exile, the weather has been Dire, Rain, Rain and more Rain and at times it has even turned to snow. I have been re-organising the freezer, getting ready for Christmas. I have made lots of soups, ranging from Pea, to French Onion, to Chunky Vegetable, to Mussel and finally Curried Pumpkin. All packed and frozen ready for hungry skiers at Christmas. I have also made two types of Tartiflette , the local cheese, ham and potato speciality, one with Reblochon, the traditional cheese, and the other with Chêvre, my cheese of choice.

I also made fish crumble, individual meat pies, stuffed some quail ready for cooking, made several types of jam, Apricot, Orange with whiskey, Bramble Jelly, Onion relish and confit of Garlic, Phew! ( we now have enough for years to come) and fruit pies. Last, but not least I found I had several bags of partially cooked ( frozen) potatoes, parsnips and turnips, umm what to do with them, not more soup. I had inspiration, Aligot. What is Aligot?  I hear you ask , well is another potato, cheese and cream dish, which can be served on its own with salad, or along with grilled meat and fish, but I thought could it not be made using the combination of vegetables on hand? Result? Delicious! 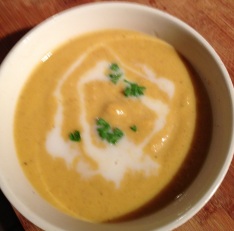 Method
Put the chopped pumpkin on a baking tray and pour over some olive oil,  just enough to the glaze the pumpkin. Roast in a medium hot oven for about half hour to soften the pumpkin.
Saute onion, garlic and curry powder in some olive oil until the onion has softened. Add the  pumpkin and stock,  bring to boil. When pumpkin is really soft, blend using a stick blender, but if using a food processor, then be careful, let the mixture cool somewhat, otherwise, it will surge up, and could cover you with very hot soup! Stir through cream and add some salt and pepper, taste well. 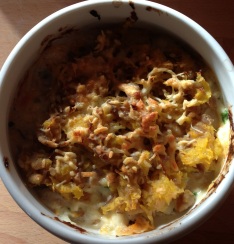 Fish Crumble, I found in my pantry a packet of French Chestnuts, they make a wonderful soup, but felt that I had made enough soup, so decided to make these Fish Crumbles, being a change from Fish Pie.

I also used the chestnuts to make a stuffing for some quail that I had just bought, disconcertingly, they came with their heads on, though thankfully not their innards. I crumbled 200 grams of chestnuts, and mixed them with a cup of Panko breadcrumbs ( Japanese breadcrumbs but dry white bread , crumbed will suffice) and  cup of chopped prunes. Stuffed each bird with this mixture, wrapped them in thin slices of  bacon and popped them in the freezer for later use. 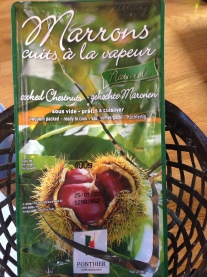 Preheat the oven to 190°C (375°F, gas mark 5)
Put the fish in a single layer in a large  pan and add  milk and wine.Season with salt and pepper to taste. Bring just to the boil, then simmer gently for 5 minutes. Take the pan off the heat and leave to stand for about 5 minutes.
Meanwhile, in a bowl mix the softened butter into the breadcrumbs, along with the crumbled chestnuts,the cheese, the seasoning  and the herbs.
Remove the fish from the pan and flake it discarding any bones.
Mix the cornflour to a smooth paste with a little water, add to the milk in the pan and bring to the boil, stirring until the sauce has thickened.  Gently stir in the flaked fish and chopped parsley and season with salt and pepper to taste.
Pour the fish mixture into a shallow gratin dish or individual dishes. Spoon the crumble mixture evenly over the top. Bake for 20 minutes or until the top is golden. Serve with some sautéed potatoes and a salad.

Aligot, as I have already said it is really cheese and potatoes.

Ingredients
2.5 kilos of potatoes
6 cloves garlic,
250 ml cream
100 grams unsalted butter
500 grams grated cheese. I use usually what ever is in my refrigerator, and I usually have in the freezers grated Emmental. Salt and pepper to taste.

This time I also added, equal amounts of parsnips and white turnips .

Method
1. Wash and peel the vegetables Put into enough water just to cover them along with the peeled garlic and boil gently until very soft but not disintegrating.

2. Strain and roughly mash together.
3. Put the cream and butter into a pan, bring to the boil and added the potatoes and then the cheese, stir so it does not burn until the cheese is melted.
4. Season.
5. Put into gratin dish(es) sprinkle over the top a little more cheese and put under the grill to brown if serving immediately otherwise leave to cool, freezes well. 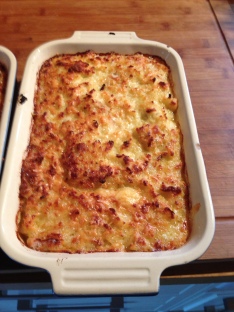