Skip to content
Oysters and Champagne in Food and restaurants March 21, 2021 625 Words 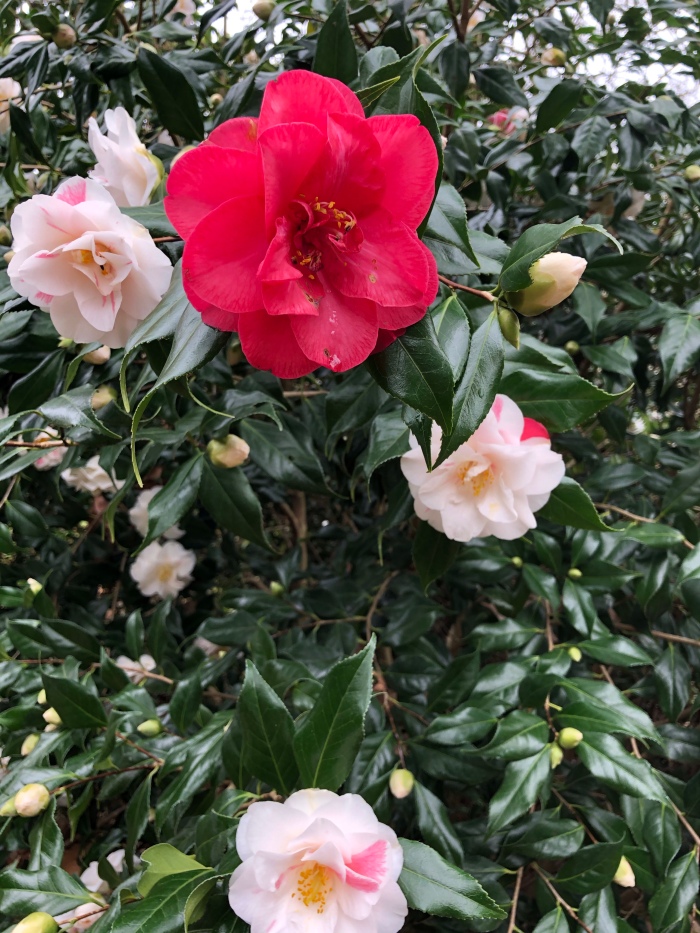 What’s not to like about fish pie? Well everything if you don’t like fish, but for those of you who do, there has to be as many recipes as the proverbial Shake a Stick!

My go to version of late has been an adaption of Richard Corrigan’s simple fish pie, however this week saw yet another incarnation of yet another version. This time around it has a slight curry flavour, which if you like curry as Himself does, then this the way forward.

It contains,of course a mixture of fish along with hard boiled eggs and potatoes as well as some spinach, very much a variation on a theme.

Before Lockdown #1,#2 and three, I would raid my “Fish” freezer to find an assortment of fish, but nowadays I just buy along with my Fish order a portion of fish pie mix. So, OK this might be just ends from the fishmongers chopping board, but there is nothing wrong with that. In my mix was about 35% salmon and the rest assorted white fish. There is no waste, no skin, no bones. To this I added two small fillets of smoked haddock and a handful of frozen prawns, All in all I had +/- a kilo of fish.

A kilo of fish makes for at least 6 portions, but for me as I had to defrost the whole bag, I had to make a very large fish pie. To my fish above I also needed the following:- 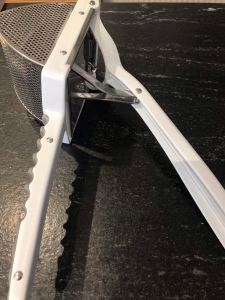 Start by making the topping which is basically mashed potatoes. As usual I cook mine in the Microwave, peel after cooking and put through a potato ricer. Using a river makes for a fine mash, but don’t rush out and by one, mashing with a fork is fine, just giving a more rustic mashed potato. Once mashed heat the milk/ cream. Mix the potato with the egg yolks and butter, pour on the milk to mash a stiffish mashed potato topping. Too soft equals too sloppy for the pie, too stiff equals too difficult to spread over the pie. So a bit like Goldilocks, it needs to be Just Right! 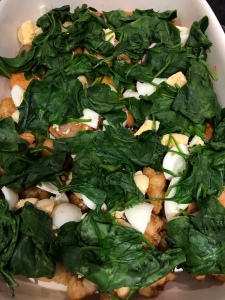 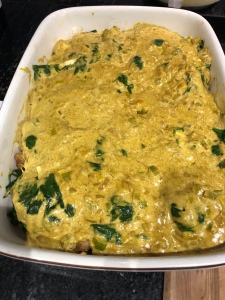 Cook the spinach, I buy ready washed spinach ( lazy I know) as then I can just pop the bag as it is into the microwave and zap for two minutes, pop open the bag, remove spinach and drain in some paper towel, it will not be very wet anyway.

Now I always precook my fish. I dip bits in flour and sauté them and drain on paper towel. After that sauté the vegetables, along with the spices, garlic etc, pour in the cream, bring to the boil, add the cheese and lemon juice. Remove from heat. Put the fish into an oven proof dish, top with the spinach and sauce and then the mashed potatoes. 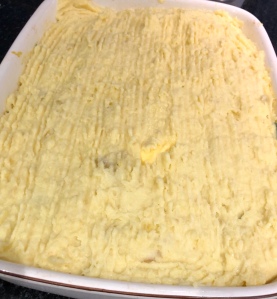 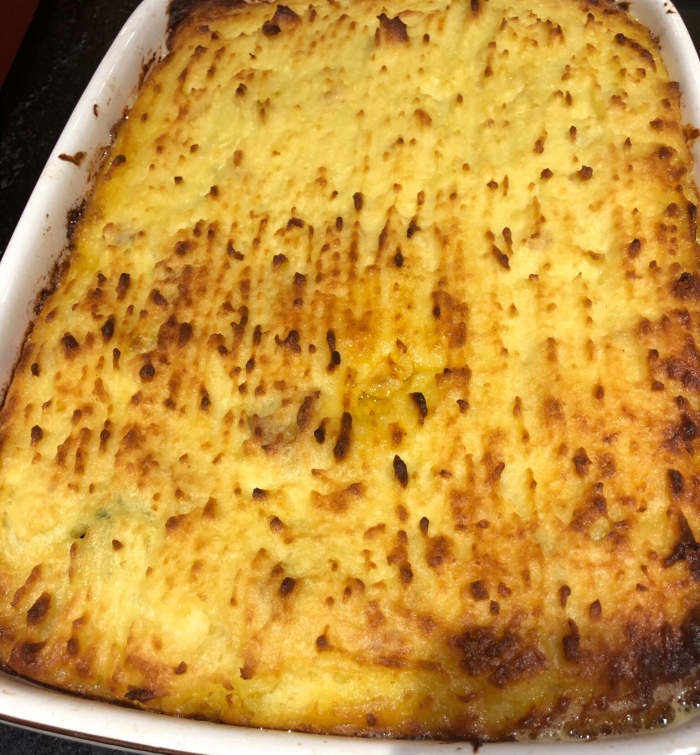 Now as you can see from my photograph, that nis a big fish pie! Never mind, once cold I cut it into man size portions, freeze, vacuum pack and back into the freezer!

Guess what Himself will be having for dinner !

2 thoughts on “Yet another Fish Pie!”