Skip to content
Oysters and Champagne in Food and restaurants November 20, 2020 398 Words

I didn’t see it but there seems to be furore about Nigella, she of the sensuous TV cookery programmes. Apparently her latest episode told, us Brits, how we should butter our toast ! We should butter it not once, but twice and then sprinkle salt on it!

Actually I could handle that, nothing like a thick piece of toast with butter oozing through it, but do I? No! Do I need all that fat, all those calories, my taste buds might indulge, but my body isn’t given the opportunity.

Something else I have learnt during this second Lockdown. We actually went for a walk ensemble once again to Richmond Park. It is only 7 miles from our home but can take an amazingly long time to get there, all depends on traffic and the never ending road works. We made it yesterday in about 30 minutes and we got there before all the others with the same idea, so parking was not too much of a problem but more importantly we got there before the rain. We went there last weekend as part of our child caring duties, parked in a different spot and although the walk was nice not nearly as nice as yesterday’s, and for most part it was because we didn’t see any Deer!

This time round, hidden by the dying mass of ferns was a herd of about 40 or more. There were a couple with amazing horns and the King Pin had at least 12 points but I believe 14, which makes him an Imperial Stag. A deer with 12 points is Royal and one with 16 is a Monarch, that would make this deer 14 years or older. 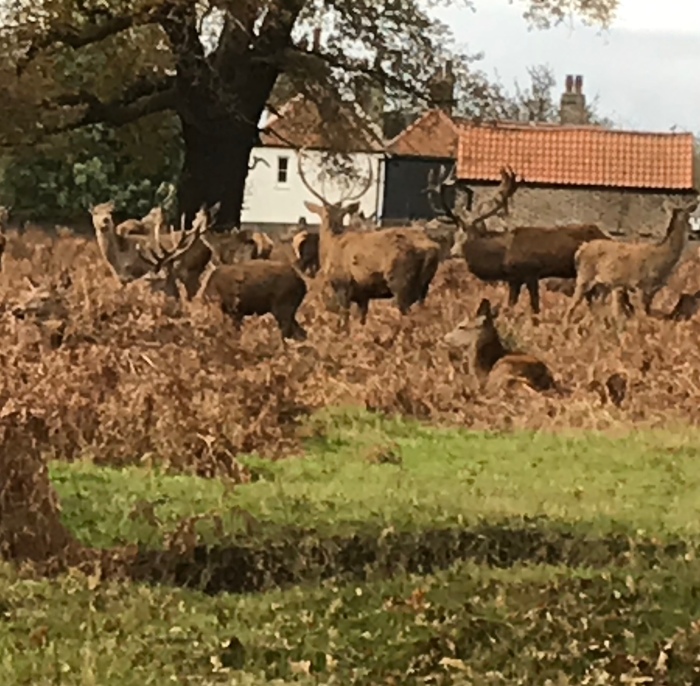 There are over 2 Million deer in the UK, the highest number in a 1,000 years. Why? Because there are no natural predators, which makes Culling a necessity, and now is the time of year ( in Richmond Park at least).

Most of the deer were buy munching basically together, but there were a couple of young bucks, hanging around on the outside. Red deer stags are the largest Mammal in the UK, many weighing over 200 kilos, which is why people need to give them space !

No Food today? Well it was a recycling day, ie. as Himself made the delicious Coq au Vin, he had to eat it two days in a row! But it did make him a crumble! More on that another day.