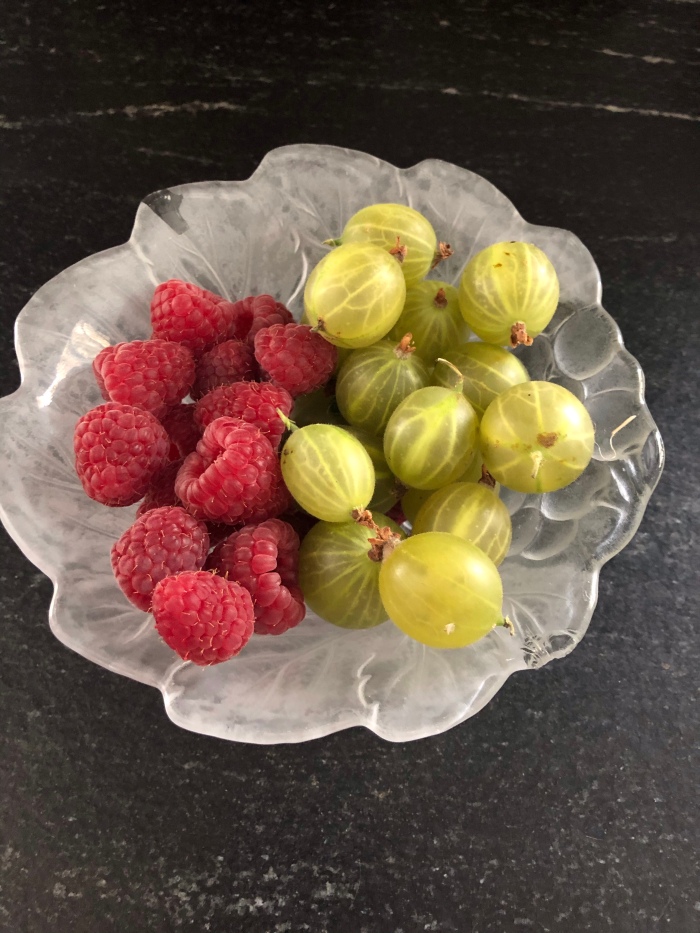 We have once again a well stocked refrigerator, thanks to my new best friends at Watts Farm. Being a Kentish girl and a Maid of Kent ( depending on which side of the River Medway is your birthplace) I am very keen on Kentish produce, especially at this time of year. Fresh green asparagus strawberries, raspberries and don’t forget the cherries.

We had a delivery the other day which did include cherries, ( now nearly all gone, eaten) along with raspberries and gooseberries. How often do we see gooseberries in a supermarket, not often I am sure. All of these memories from my childhood, where we were pretty much self sufficient in fruit ( raspberries, strawberries, gooseberries, black and red currants, ) and then beans and peas, cabbages and lettuces, onions and parsnips, turnips and swede, potatoes of course. These were days before a freezer was common place in the home, so my memory was mother “Bottling” or “salting” so we would have a supply during the winter. My memory too of wrapping apples from the local orchard in newspaper, staking them in boxes and storing in a cool dry place, likewise so we could have apples during the winter months.

And so it was, I was left wondering what to have for dinner, with my new found supplies still intact ( well almost, not the cherries), when Himself had a cunning plan. As we are the now proud owner of a mini gas BBQ, he was very keen to use it again. We have used it just the once for a hamburger and now it was calling us again. What was it to be? I know Himself said, Squid, memories of our visit to Portugal last year and the absolutely divine Octopus. Squid it was going to be, out of the freezer came two packs of frozen squid, which not only needed to be defrosted but cleaned and brown/ pink skin removed as well.

Once defrosted, squid looks not so nice but is easy to clean. Simply pull off the head, which might or might not pull out the innards ( creamy white and gooey, but not horrible), remove the innards as well. Cut off the tentacles from in front of the eyes and discard the eyes and ink sac.Pull out of the body, a clear piece of cartilage which runs the length of the body of the squid, and discard. I find it easy to remove the brown/ pink skin by rubbing it with a bit of kitchen paper. Rinse the squid in cold water and pat dry. It is now clean and white.

Many people think that squid is tough and yet one of the most popular starters in some of the chain restaurants like Côte or Bills, is fried calamari, with usually a chilli dipping sauce. 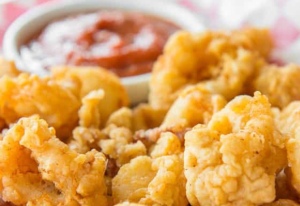 The method of cooking squid can be done in two ways, either hot and fast or slow. If hot and fast, then think grilling, flash pan frying and Barbecuing. Slow, then think of stewing and braising. 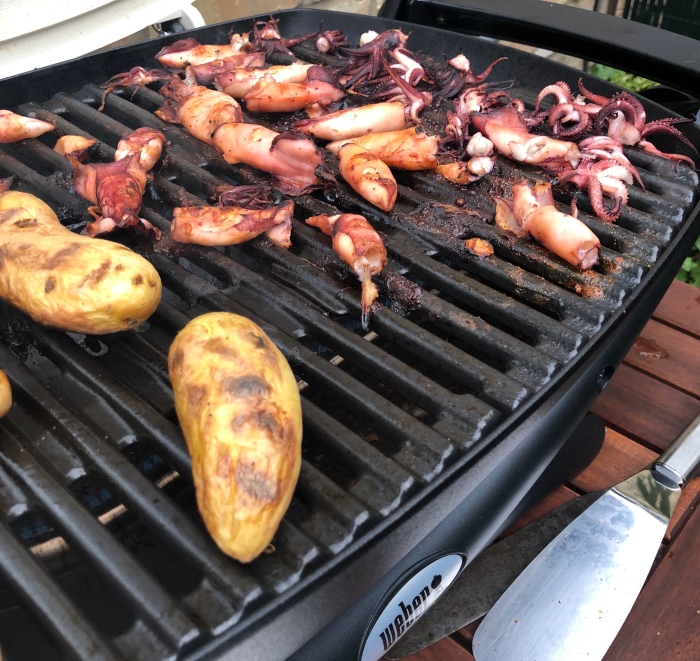 Therefore to Barbecue Squid for 3-4 people, take about 500 grms Cleaned squid and toss it in some olive oil with some added salt. Heat the grill to really hot, throw on the squid and grill for about 4 minutes ( or less) until it is opaque. Serve at once with either simply a squeeze of lemon, or garlic butter, or anchovy butter or as we did with Harissa butter. 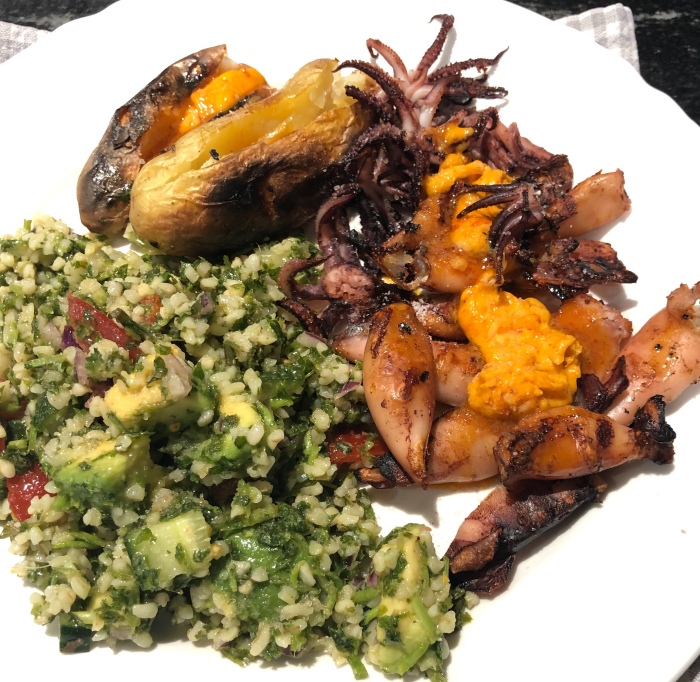 To make this simply add a teaspoon of shop bought Harissa to softened butter and mix well, add some squeezed garlic and salt as well, serve on the hot squid.

Harissa is a Tunisian spice made from roasted chilli peppers and other spices, and Rose Harissa is Amale with rose petals and is a softer version. It maybe bought in a tube a small can or the Rose Harissa in a jar. Refrigerate after opening, or in the case of the small can , I would freeze it. 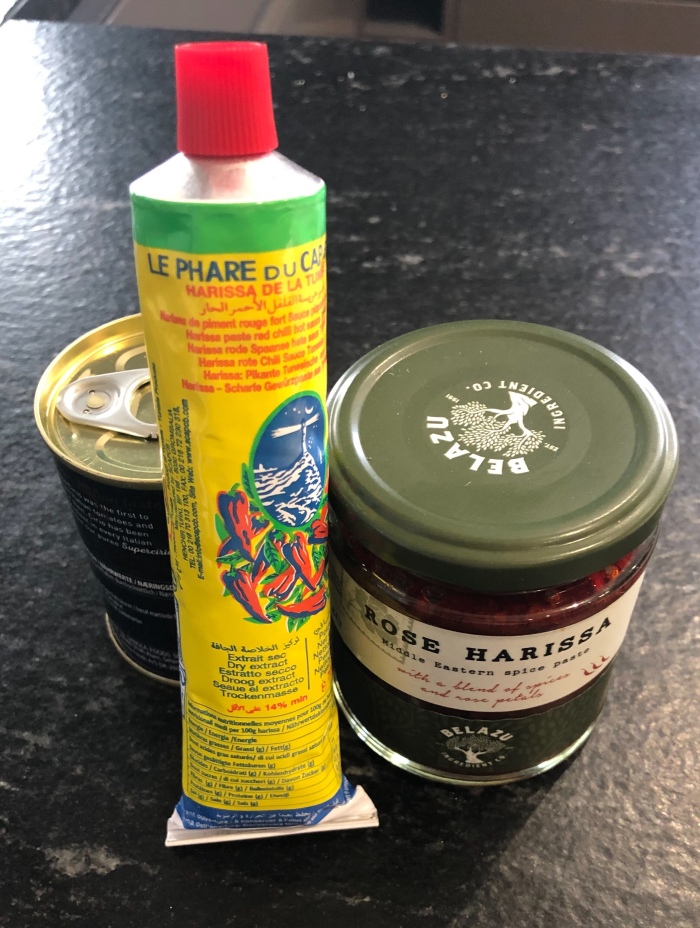 Now if only He would remember it is SQUID and not Shrimp, then we might have it again.

One thought on “Dinner tonight?”