Skip to content
Oysters and Champagne in Food and restaurants July 8, 2018 476 Words

This week, we have a friend from New Zealand staying ( via way of the UK and Belgium ) and I have to admit that she is a big fan of “Himself”. No criticism of Himself is allowed when she is around! So working on boosting his already high ego, he declared he would make Dinner.

Me? I was off to the golf course, whilst House guest was off to Cambridge.

I gave Himself, three options:-Stuffed chicken breast, cooked Sous Vide ( he has become quiet a dab hand with the Sous Vide machine) , problem is, it is connected via my phone! Bang Bang Chicken, which I love and have not had it in years, used to be one of my favourites in Houston, in a restaurant strangely called Houston’s, and also in The Ivy in London. Or Singapore noodles! He chose the latter!

Not sure if it really is a recipe from Singapore, Singapore is the Manhattan of the East. Its cuisine is such a mixture, with influences from Malaysia, China, India, Indonesian and don’t forget the British. All of these have influenced Singaporean cuisine. And one cuisine, that is a complete mish mash of these is Nyonya cuisine which comes from the Peranakans who were the descendants of the early Chinese settlers, who married local Malays and therefore combine, the various cuisines. The majority of Singapore’s Chinese population is Hokkien, and this a version of their all time favourite noodle dish, Singapore noodles with pork and prawns.

Heat the oil in a wok or deep-frying pan, over a fairly high heat, fry the prawns for about 3 mins, until they turn pink, be careful not to over cook as they will become tough. Remove from the pan and put to one side. Add a little more oil and fry the mince for about 4 mins, breaking it up as it cooks. Add the carrots and the chillies. 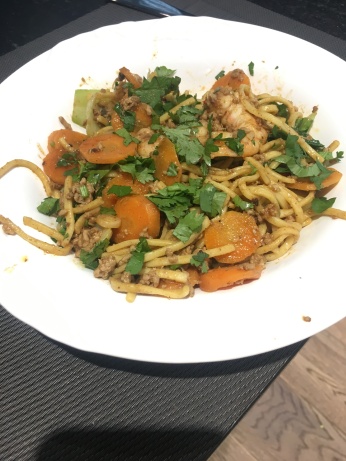 Cook for a further 3-4 mins, before adding the Pak Choi or Spinach. Add the noodles and then the water or stock, scrape the bottom of the pan. return the prawns to the pan, make sure the vegetables and noodles are cooked and serve immediately, garnished with the spring onions and soy sauce on the side.

If using nuts add them just before serving.

Not maybe the prettiest of dishes, but taste wise, excellent.

3 thoughts on “Himself Cooks a Stir Fry!”