Skip to content
Oysters and Champagne in Food and restaurants November 19, 2017 602 Words

The other week, the Domestic God, excelled himself, and No it was not Oysters Rockefeller!! He told me I had to rise early and spruce myself up and be out of the house by 6.45!

Duly Done, I found myself in St. Pancras Station waiting for the early morning train to Paris, and Yes we went to Paris for lunch. All very decadent of course but he took me to a three star Michelin restaurant, near the Eiffel tower, on Rue Beethoven. It is called  L’Astrance  and has been listed in the top 50 of the worlds best restaurants for the last 7 years. 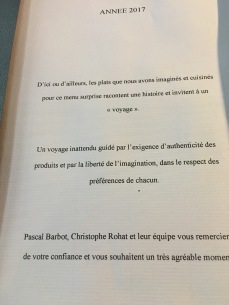 It is a small restaurant with only 25 covers, but  it still maintains crisp white lines. We were lucky to have one of the three small tables upstairs, which gave us a perfect open view of all that was going on. The service was impeccable without being in any way pretentious. Interestingly, there is no menu, never a menu, but one can choose how many courses one would like to eat and if to take the wine pairings option or not. We took the wine pairings, and they did indeed serve some very interesting wine.

Our first course or Amuse Bouche, was a small walnut tart along with a cucumber and  mousse tart. This was followed by the most raw mushroom I have ever seen! It was sliced into wafer thin slices and these were stuffed with Fois gras and a confit Citron on the side. The third nibble was , a couple of mini spring rolls with langoustines on a bed of caramelised peanuts and a peanut satay sauce. 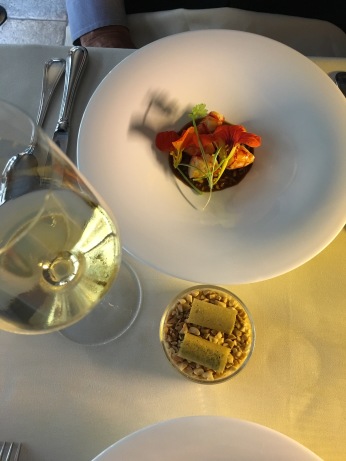 These were followed by Patagonian toothfish. I had not heard of this fish before and little wonder. It lives in the cold waters of the southern Atlantic and is of a cod type. it lives  in deep water, (45m-3850m) but you are more likely to know it as Chilean Seabass. This name was created in 1977 by an American who was trying to sell it to the fickle American Market and the name has stuck. The fish is believed to live up to 50 years and its welfare and controlled fishing, is controlled by the Commission for the Conservation of Atlantic Marine Living Resources ( CCAMLR). The fish was served with a grapefruit, cabbage and pineapple sauce. Then we had chicken with red cabbage along with a chorizo type sausage mousse, quickly followed Duck from the Chalon region with a confit of tomatoes and a quince puree. And then a dish of Puree potato, but unlike you have ever had before, as it was served with Fromage Blanc  vanilla ice cream with thyme. 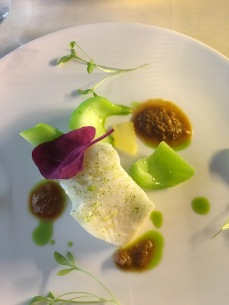 We finished off this extravaganza with a sweet chilli sorbet followed by banana cake and frozen cheesecake with shaved milk and an egg nog.

Given that there are only 25 covers in this little restaurant there were 7 waiters, hence the impeccable service. 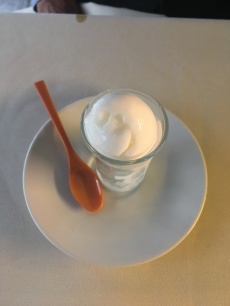 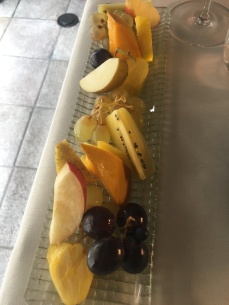 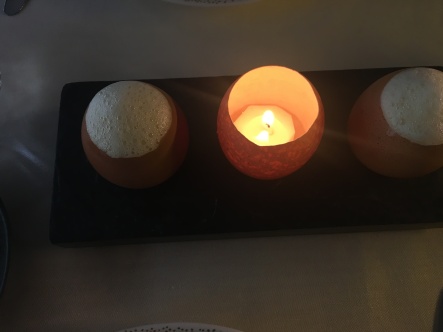 Once we were suitably satiated, and we were, more than, we hopped back into a Taxi, back to the Gare du Nord ( some very odd memories of this station from my youth) back onto the Eurostar. We made an unscheduled stop somewhere near Lille to rescue some stranded passengers from another train and back to London. Another quick cab ride and off to the theatre. Not sure that either of us were ready to sit and watch an Oscar Wilde play, but we are not complaining, as “How Lucky are we?” Will we go back? Yes hopefully, one day !