Mother’s Day in the UK is in March but is celebrated around the world at various times. All the whilst living overseas, my own mother would always be upset that I never knew when Mother’s Day was, I could be excused not having siblings to remind me!

This year, my two living in the UK took it in turns to treat me, one for breakfast and bubbles and the other for afternoon tea!

The willowy brunette summoned me to one of my favourite local cafes/restaurant. The Wolseley on Piccadilly.  I love the Wolseley, the decor, the service, always impeccable and of course the food, simple but divine!

One of my favourite breakfast is, as I am sure I have said before, smushed Avocado on Sourdough toast and poached eggs! This has become a firm favourite ever since trying the various versions available in Mexico City, add some some Chilies or some Tabasco and Perfect!

Several restaurants/cafes near by me have their own versions of this yummy breakfast. The first one that the Brunette and I tried is The Ivy Cafe in Marylebone. This is one of the “baby” Ivy’s, off shoot of the famous The Ivy.  All of the Ivy cafes have this on their menu, including The Ivy, but there is just one thing wrong with their version. The bread! The menu says:

Chopped avocado with roast plum tomatoes, poached hen’s eggs on toasted granary with sesame dressing, the Avocado , good, the eggs, good, the tomatoes and sesame dressing, also good but the bread! The sesame dressing seeps into the toasted granary bread and is a soggy mess! My dear Aunt used to comment, ” Nothing worse than cheap bread”  We did ask on our last visit, if they had Sourdough, but the poor waitress had not a clue about that which we were asking! Maybe next time I will ask for my toast on the side! Umm now that is a thought!

Another place we tried this was Hardys, also in Marylebone. A small local restaurant. I made a reservation for the blond the brunette and myself, for 11.30 one Sunday morning. We went for an early morning walk and by 11.30 we were ready for a good coffee and breakfast! A little surprised, there was only one other table occupied , but never mind. Eh Voila, on the menu, Smushed Avocado with poached egg on Sourdough! Perfect! We all ordered it. However, what a disappointment, maybe a quarter of an avocado smushed on half a slice of Sourdough and a poached egg! And at £9.50 or thereabouts, more expensive than The Ivy not substantial enough. The girls decided to pass on the coffee and find somewhere else to finish breakfast. To top of this experience, the restaurant was cold, we needed to keep our coats on, and there was, of course 12.5% added on for service. Not usually being mean spirited, however, this time I declined to pay it, much to the chagrin of the waiter! So a place to avoid, too bad as it is a stones throw from home!

So now at the The Wolseley  they serve smushed Avocado on toasted Foccacia. But the eggs have to be ordered separately, hence making the whole thing a tad more expensive, but yummy! Along with a Mimosa, perfect Mother’s Day breakfast. 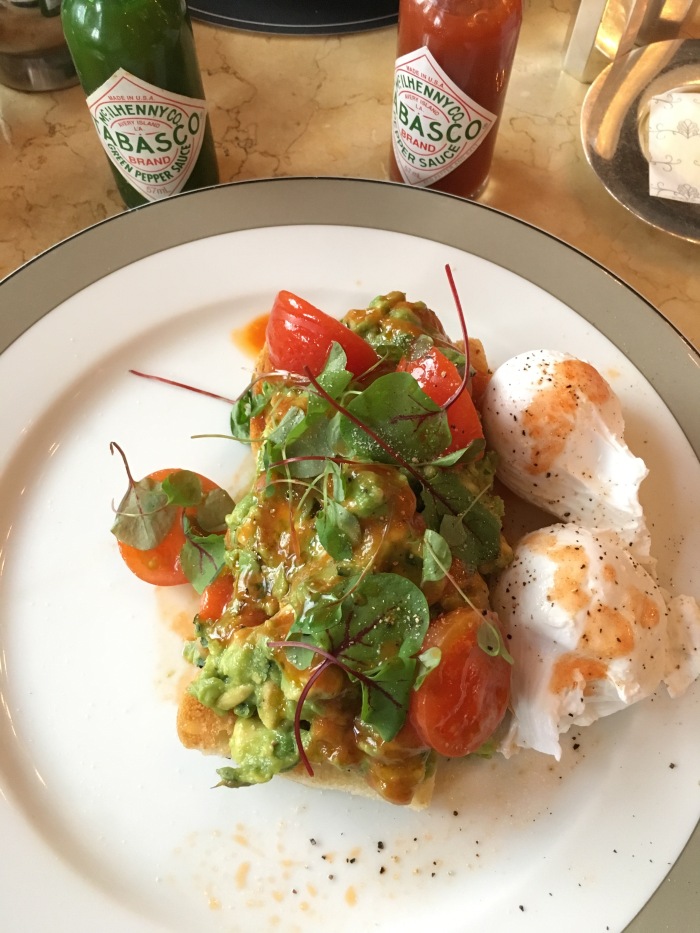 After breakfast, a stroll around St. James park, a film crew on location, horseguards, and the changing of the guards, all perfect, the sun was shining. To make the morning more perfect a quick visit to the new handbag department in Selfridges on Oxford Street. No not to ogle the handbags but to try out the new Champagne bar, this too was perfect, the Sunday hordes had not yet descended and if you don’t like champagne on a Sunday morning, they also serve coffee and tea!