Skip to content
Oysters and Champagne in Food and restaurants August 5, 2016 404 Words 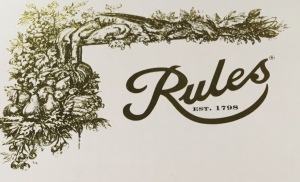 The restaurant Rules, is the oldest in London founded in 1798 by Thoma Rule. Rumour has it that it is where the actress Lillie Langtry met secretly with Edward 7 th the Prince of Wales ( who was married to Alexandria and had 6 children). Other notable clientele included Graham Green, Charles Dickens, H.G.Wells, Laurence Olivier and Clarke Gable.

Downstairs in the main restaurant, the decor is rather velvet and chintz in an old fashioned Edwardian way and many of the dishes on the menu are also of a time gone by, but that does not mean that they are not worth eating. Quiet the opposite in fact. If you are looking for Oysters and game pie, then this is the place for you, or what about Belted Galloway Beef  ( the only place in the UK where you can eat this).They also serve a good selection of fish and seafood, as well as dressed crab, potted shrimps, grouse and suckling pig.

However they also have private dining rooms, one of which is named after Graham Greene and as I go up what looks like the back stairs, and through thick velvet curtains I think of Lillie Langtry on her secret assignations.

I have eaten in the private rooms a few times but twice when himself has organised a dinner for me, I have to say they were ten years apart, but both came as a big surprise. And so it was for my recent birthday, to go up the back passage, through the curtains to be greeted by friends, old and new. 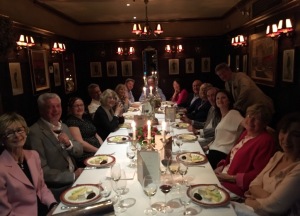 Youngest daughter had again come up trumps by ordering yet another custom made cake from the wonderful chocolate creationists that are Choccywoccydoodah. They have a shop on Carnaby Street, where one can buy ready made simple examples of their artistry ( dog) 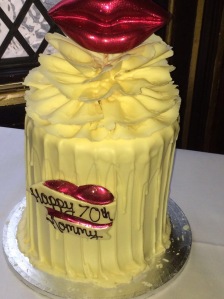 The Rules company own an estate in the High Penines where they teach all the rules of game management and I believe they also run a three day course on all things game. Another project which  they support is the Friends of the Connection Social Care. This is in support of the Connection at St. Martins , which helps over 5,000 homeless people each year.


Make sure you visit during the game season, starting in August with Grouse. And where is it? In the heart of Covent Garden.

2 thoughts on “Birthdays and celebrations”