Skip to content
Oysters and Champagne in Food and restaurants May 25, 2016 548 Words

As you must know by now, I have an obsession with markets, so last Sunday I was strolling along and found the Marylebone, Sunday  Farmers Market. Apparently , all food for sale has to be local, a bit difficult in Central London I imagine, but Hey Ho!  There are stalls selling English cheeses, a couple of Fishmongers ( a bit difficult to call these local ) a couple of butchers ( cows and sheep and goats grazing alongside the North Circular ?) But never mind, on a nice sunny Sunday, there is enough there to interest me. This week it was Ox Cheeks.
Ox Cheeks are those cuts of meat that no longer grace the supermarket shelves , being unfashionable and timely to prepare. A bit like in Texas , where it is almost impossible to buy any sort of Offal in the “American” supermarkets but amble on down to the”Mexican” ones and there I could buy Veal Sweetbreads, chip as chips! A pity that my kids thought they were indeed yummy, all the time they thought I was cooking chicken goujons, the moment I told them it was offal, they did a runner!
Still back to my Ox cheeks. They require a fair amount of cutting and removal of fatty bits and sinews , so a fair bit of waste, but then again not expensive. They also require a reasonable amount of cooking time, as they can be a bit tough ( just think about all the chewing that the cow has done). However, once that has been done, it is easy to throw it in a pan, put on a low heat and simmer for an hour or two. Of course the same idea/ recipe for

any cheaper cut of meat

So I used
1 1/2 kilos of Ox cheek ( de-fatted, de-sinewed, cut into smallish chunks)
2 large onions sliced
6 cloves of garlic, smushed,
4 carrots peeled and sliced
A dozen or so of green and black olives without stones
A dozen or so de-Stoned prunes
3/4 bottle of red plonk ( I actually used some  Port that was asking to be used)
1/3 jar red currant jelly
Some flour for dusting the meat.
Some Olive oil for frying.

Salt and Pepper to taste 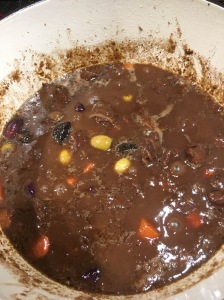 Heat the oil and sauté the onion and the garlic until soft but not brown. Remove and put to one side. Dredge the chopped up meat bits in the flour, ( the easiest way to do this is to put some flour into a polythene bag, add some of the meat, seal and give a shake, remove meat and repeat with the rest) sauté the meat in batches, to seal. When all the meat has been sautéed add  the onions, garlic and carrots along with the red wine, bring to the boil tune heat done, give a stir so that all the lovely bits from the frying get off the bottom of the pan, cover, reduce heat to just a simmer and leave for an hour or so. Give an occasional stir. Test by eating a bit of meat. When ready, add the olives, and the prunes and salt and pepper to taste. I topped it all off with a few pomegranate seeds, as they are in season at the moment 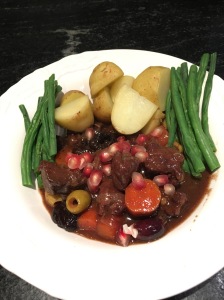 Serve with new potatoes or pasta and some green beans, enough for four. Himself said Yummy !