Skip to content
Oysters and Champagne in Food and restaurants, Travel June 22, 2014 747 Words

I am delaying the continuation of all things Mexican. There is so much to tell, but meanwhile back in London, there has also been a lot going on. This week, has seen us eating at the iconic restaurant that is known as the IVY as well as Côte in Islington, Quantus in Chiswick and Memories of China in Kensington.

So for starters, we had a house guest who had never been to the IVY, so we went. It belongs to Caprice holdings, which owns/runs many London restaurants, including La Caprice, Daphne’s, J. Sheekey, Annabels, Harrys Bar,  as well as Côte, Grillshack and Balthazar, and until recently Wentworth. All I can say is that the service in all of these establishments is impeccable, but not at all stuffy, friendly and professional.

The Ivy is the ultimate people watching venue, and we were lucky enough to be facing into the room ( himself faced the window/wall, poor thing). As far as I could see, there were no rich and famous to focus on, but some American business men with their escorts ( Indonesian and female) and some English, boy next door types, with their English escorts ( Dusty Springfield look alikes, have not seen backcombed Beehives in years).

I and house guest ate the fois gras, which was divine,whilst himself had the steak tartare( raw meat to you and me), his disappointment was that he could not mix it himself. for mains  they chose the calf’s liver and bacon whilst I had the dressed Dorset crab , with a side portion of chips. The crab salad was lovely but I have to say that I had to send the chips back, if I am going to have chips ( which I shouldn’t) then they have to be perfect, and the first ones were on the soggy side and only luke warm. I have to say that 2nd time around, they were perfect, crisp and hot.

For dessert,Herself, chose the sticky toffee pudding, which she declared half way through, “I should not have, I can not finish it”, and himself had the frozen berries with hot white chocolate sauce. this is such a splendid pud and sooo easy to make. The Food at the Ivy would not be called fine dining, BUT the menu is very eclectic, that it is very hard to decide what to have, so much to choose from and then every two weeks they change some of the dishes out, so even if you are dreaming of the fish cakes, or fish pie, or the best hamburger, it might not just be on the menu when you get there. That just means you have to go again, and why not!

Côte I have written about previously, a good place to go for lunch with girlfriends, or breakfast with hubby, pre theatre, post theatre, the standard is consistent, the quality good, the service excellent and the price is right.There are now 47 Côte locations with 24 of them being in the London area, so if there is one near you, do check it out.

Onto, last night, I went to a wine tasting event held by Naked Wines.

Naked Wines is an online wine retailer  which launched in the UK on 1 December 2008 and founded by Rowan Gormley.

They fund independent winemakers from around the world, in return for exclusive wines at wholesale prices – and they currently ship wine throughout the UK, the USA and Australia.To get the best price from this company, you have to become an Angel. This costs only £20 a month and it remains you money, as every time you buy, the £20 is deducted from your bill. Some of the discounts are up 40-50% so well worth the investment. Anyway, I went with friends, tasted some excellent wines and then had dinner in a great Chinese restaurant called “Memories of China” This is Ken Lo’s restaurant which opened 30 years ago,  and although the food was good, I think it is probably a little jaded. With so many other restaurants in London, it will have to up it’s appeal as on a Saturday night it was fairly empty. Our waitress who was from Nepal, was charming. 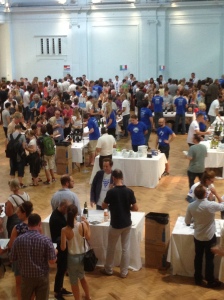 So if you like fine wine, from small independent producers, check out NAKED WINES> you will not be disappointed! Back to Mexico, next time!

One thought on “London Calling”