Skip to content
Oysters and Champagne in Food and restaurants March 17, 2014 888 Words

Last week, the Ladies who Lunch, well Lunched!  We usually meet about 6 times a year and try out the hottest and newest restaurants in town. Last week was the turn of a “pop up” owned and run by the same people who own “Pied a Terre” , a Michelin starred restaurant in Bloomsbury, London and its Sister restaurant “L’autre Pied”, in Marylebone , also in London. The pop up, was also a play on the name as it was called, “Pieds Nus”, and was also in Marylebone.

I arrived to find my friend perched on a very high bar stool at a very, very high bar/table, without my saying a word, she said  “We can’t sit here, I have already told them!” The waitress arrived, and I repeated this, only to be told that they were full and that no other table was available . Umm!  The manager arrived and we repeated ourselves again, he also said, they were full! At this point we decided we would go elsewhere. And then a miracle happened, a normal table was available! And just two men were seated at the Bar and I have to say, they were not full.

The meal itself was unremarkable, and the portions minuscule , there was not a lunch time menu, which is normally a very good deal at good restaurants, when small portions are acceptable. It was only a la carte. Several of us chose the starter with Jerusalem Artichokes, all with the comment” we do not see Jerusalem  Artichokes on the menu that often. Well, these artichokes had never been near Jerusalem and were in fact just small normal artichokes. This was pointed out to the waitress, she just said” oh it must be a misprint”!!

The menu and a photo are here. Just as well it was a Pop Up and has already Popped Down, as we would not be in a hurry to return.

( Having said that, we have eaten well, and been well served at the sister restaurants).

Shrove Tuesday ( Pancake day in the UK) has been and gone. Apparently in Russia and the Ukraine, it is almost a week-long celebration, and of course around the world is Carnival, and Mardi Gras in New Orleans, in the USA.

I actually did make pancakes this year, it is something I almost never do, ( except when making them for breakfast for my grandchildren). However, I made Crepe Salé. Savoury crepe, which are usually made out of Buckwheat flour.Despite the name, buckwheat is not related to wheat. It is not a grass but belongs to the same family as Sorrel and Rhubarb.Tibetans have long eaten Buckwheat noodles and in France it is known as either Sarrasin, or Blè Noir.

In any case, it makes very good savoury Crêpe.

I believe in the “all in one” method of mixing, it easy beyond belief, especially if you have a food processor.

Put the flour into the food processor. pour together the milk, cream and eggs into a container. Switch on the food processor and with the engine running pour in the liquid mixture. Switch off and scrap down the sides of the machine, switch back on and process again until you have a smooth mixture. Check for thickness, it should be like thick pouring cream, too thick, will make a real stodgy pancake, too thin it will be very difficult to handle. Many recipes call for resting after making, I never do this, it is not going to rise, as you are using plain flour.

Lightly grease with butter  a flat pan ( 10″), preferably a crêpe pan, I only use my crêpe, for making crepe. I have a cast iron one, which I never wash, just wipe clean. Set over a medium heat and ladle in enough batter to cover the base of the pan, when you tilt it make sure you cover all the pan. Cook without turning for about a minute, or until the top side is just set. Turn over either with a palette knife or by tossing. cook this side for about 30 seconds. Be ready to lose your first crêpe, the pan needs to season a little. If the first crêpe seems a little thick, dilute your mixture with some milk. Repeat this until you have used all of your mixture. Alternatively, make what you need and store the rest in the refrigerator for a few days.. Then you can fill them how you like. This year for my Crêpe I filled them with a mixture of Ricotta cheese, soft goats cheese and cooked drained spinach ( frozen spinach comes in very handy here, but you must drain it well.)

Spread onto a crêpe some of the fillings, and top with another crêpe, repeat the filling process. Repeat this until you have a small stack of 6-8 crêpes. Grates fresh parmesan cheese over the top and bake for 15 mins in a medium hot oven, until hot all the way through.

Serves 3-4, serve with a mixed salad. 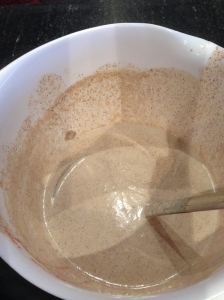 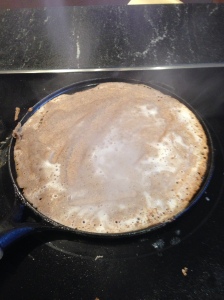 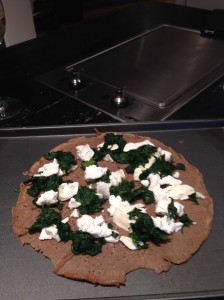 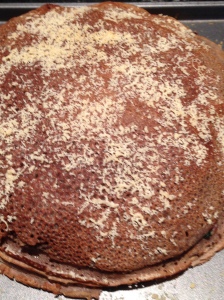 2 thoughts on “Ladies who Lunch”