Skip to content
Oysters and Champagne in Food and restaurants November 4, 2013November 22, 2015 553 Words
I returned home from Chicago, where I had been for the Marathon ( not me I hasten to add) to find my home resembling the scene from the film Dr. Zhivago,where he returns to his home only to find it occupied by a load of strangers and himself being confined to one room! Yes! We have builders, and so we have been forced to leave.
Whilst in  the USA, we dined on the obligatory post Marathon Hamburgers, in the not so customary Hamburger Joint of the Ralph Lauren Restaurant aptly named the RL. It is attached to the Ralph Lauren store, on Michigan Avenue ( aka the Magnificent Mile). The Decor and interior were just like the Ralph Lauren shops, pretending to be Olde Worlde English gentlemen’s clubs, lots of wood and leather, rather overcrowded with the number of tables, but pleasant surroundings nonetheless . The service was slick, despite having to ask twice for an ice bucket for our post Marathon “Bubbles”, the service was also fast, a tad too fast, but hey it is the USA, AND, someone had just run 26.2 miles  (again)! The Hamburgers were just what was needed and were really  good.

The next morning ,we  hunted for the best pancakes in town, another post marathon ” must have”. We happened upon the ” Wildberry” and judging by the line outside, decided it was for us, the wait? An hour or thereabouts, fortunately we were given a buzzer to hold, which enabled us to grab a coffee and sit along with the rest of Chicago in the sun, waiting our turn. The Wildberry did not disappoint .

Following on from these two delights was “The Cheesecake Factory” this is a fairly upmarket US Chain, and it is a bit of a factory, but having just been up the Hancock Tower to fight with the masses for the wonderful view of Chicago by night, this restaurant was just downstairs. We opted for a salad, which of course was enormous, but then just look at the desserts! Heart attack here we come! 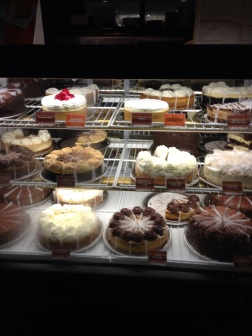 Back to reality, well not quiet , eating in the wonderful Pied a Terre restaurant in London. It had been a two star Michelin, but now sadly only one star.

To start with we both chose the same, which was the Veal Sweetbreads served with Steak Tartar and smoked eel, Delicious! Veal today is perfectly acceptable to order and to eat, gone are the days when it was considered not correct. Veal is the meat of young cattle, it can be produced from a calf of either sex but  most veal comes from male calves of dairy cattle breeds. Only one Bull per herd is required and so the young bulls would need to be slaughtered in any case . Nowadays they are given freedom before slaughtering . 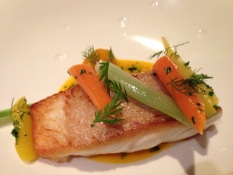 Following on from this I chose the Pan Fried Halibut with Heritage carrots whilst himself had the Honey and Lemon Thyme duck with dumplings.

Neither of us chose a dessert,which was just as well, given the plate of petite fours that arrived with our coffee, along with some doughnuts! 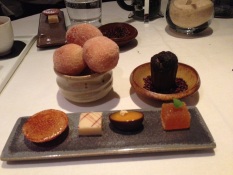 So now we really are back to reality, we are back in France, our Home from Home, where we have celebrated Halloween, carved Pumpkins, and made Toffee Apples, but more on that later!