Skip to content
Oysters and Champagne in Food and restaurants October 21, 2020 499 Words

Yes, we have escaped again, on a road trip to a Haunted Scottish Castle. Bearing in Mind that London has been moved into semi special measures, we are not allowed to Mingle, but that’s Ok, I’ll just mingle with Himself and and Vice Versa.

We are on a reconnaissance trip to this Castle on the East coast of Scotland, delayed from May. Apart from Himself having a contre temps with a kerb negotiating the narrow road around Loch Lomond, (but better than having a contre temps, with an oncoming truck,) we managed to find our castle without too many difficulties.

But back to London, last week was spent trying out a couple of new ideas and recipes. Namely, gnocchis with a twist. I had bought some celeriac with my Vegetables from Watts Farm, without a firm idea what I was going to do with it, be it baked, or remoulade or what ?

I decided I could make gnocchi celeriac with potato would fit the bill.

At this point one can decide if to use them straight away, or as I do, flat freeze them, then when frozen, bag them and put them in the vegetable section of your freezer until you need them. 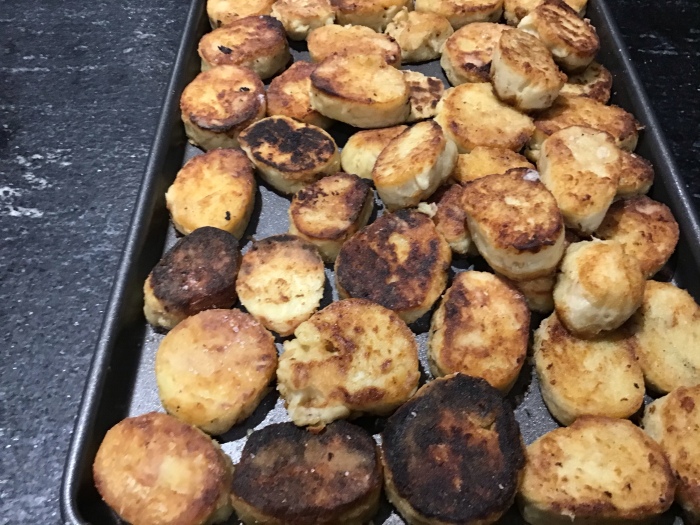 Meanwhile, Himself periodically goes Rogue and takes himself off to a grocery store. His store of preference is Selfridges ( for uninitiated read Harrods or the smartest grocery shop that you know). He normally buys me Oysters but this time around it was Shrimp and Squid! Simply marinated and grilled on a Barbecue, ummmm! Delicious!

He knows the way to a Girls Heart, Seafood, Seafood and more Seafood!

One thought on “We Have Escaped Again !”