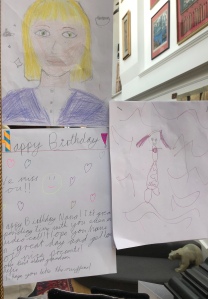 June the First, my birthday and as such I actually did not cook, did not cook on Sunday nor Monday. Sunday we went on a wonderful picnic, my eldest grandchildren baked me the most magnificent muffins and made me birthday cards, whilst the youngest made me a photo album( as of course I haven’t seen them for over three months and newborns change rapidly).

I have an abundance of the most beautiful flowers, all my favourites, Peonies, they are available for such a short period of time, I chose them for my mother’s funeral and eldest had them at her wedding. Roses, who can not love roses? And Sweet William , memories of my childhood garden.

On my Birthday, Dentist daughter, the willowy brunette, came for dinner, we sat outside on the terrace and for the first time since the Lockdown began, we ordered and had delivered dinner from outside.

We ordered from a Michelin Starred Indian Restaurant not far from our home. We have walked past it on numerous occasions and as they are one of the finer restaurants offering a delivery service we thought, Why Not ?

We ordered 2x the seafood feast for two, it arrived right on time although the driver from Deliveroo, was confused by the number of entrances to our Mansion Block, but he eventually managed to find the right front door.

Himself set the table , chilled the champagne whilst we waited for the willowy brunette to arrive. Arrive she did, bearing gifts, Bubbles, Flowers and a most magnificent cake! As she said to a shopkeeper, when he commented on her grocery purchases ” Everyone seems to be baking” She replied ,” Well they must be, if even I am so doing “!

The cake was as light as a feather and contained pineapple and star anise. Not be thwarted by the lack of Star anise Powder in the shops, she ordered online, only to be thwarted again, as it cam in star anise form and not powder, so she bashed ( rolling pin) and ground ( pepper mill came in handy). As a dentist she has learnt to be innovative and also precise, although my memories of her wanting to bake as a child, cup cakes always a vivid blue! I must ask her for the recipe! She even bought a special pan to bake it ! I am impressed.

Dinner was really nice even though I am not too sure what we ate, a yellow sauce was delicious, full of shrimp and as there is plenty of sauce left over, I will recycle it this evening using salmon. 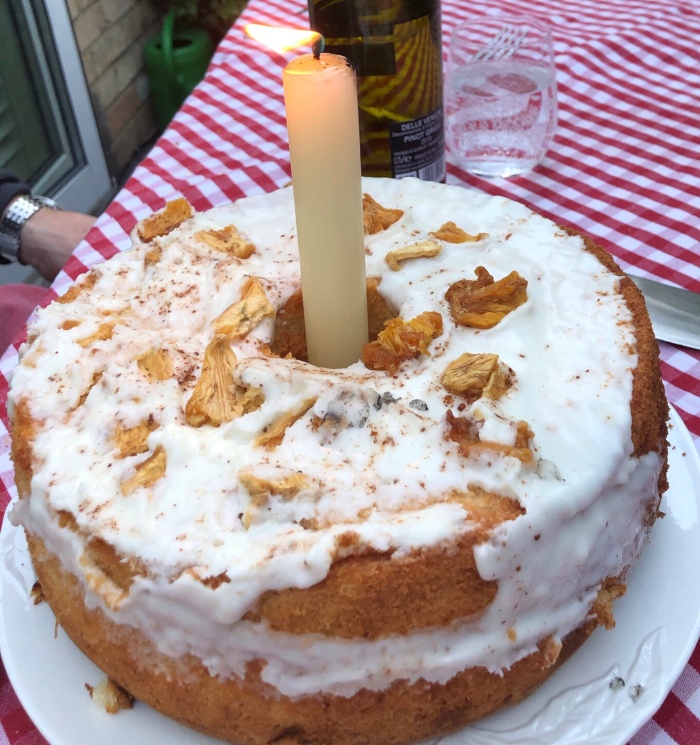